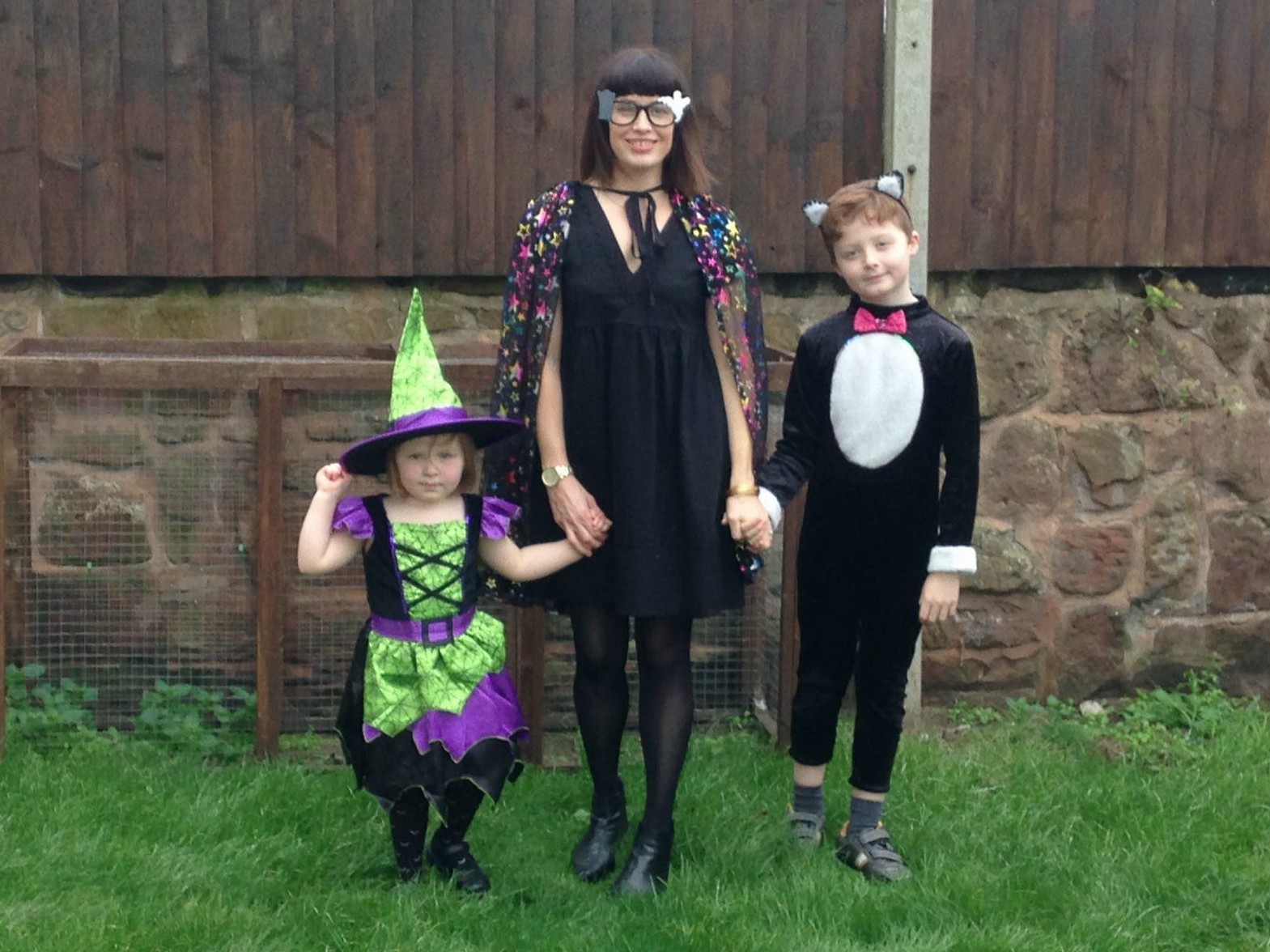 Rather than the last minute rush for a family photo, this month I’m pretty much spoiled for choice as we’ve been away this weekend and had lots of opportunity to pass the camera to a friend and ask them to do some quick snaps of the three of us.

Seeing as it’s Halloween today though it would be rude not to share some of our fancy dress pictures from over the past few days. We went to two Halloween parties on Saturday and are having our own mini get together and trick or treat night this evening. It’s a bit of a family tradition as we have had Halloween parties at home for the past three years, it’s always a laugh to get the kids together and go and say hello to some of your neighbours while looking absolutely ridiculous!

This will be our first time trick or treating in our new street, but I’ve already spied a few pumpkins in windows so I think we will be fine. We also have friends on a few streets nearby so plenty of people to call on. 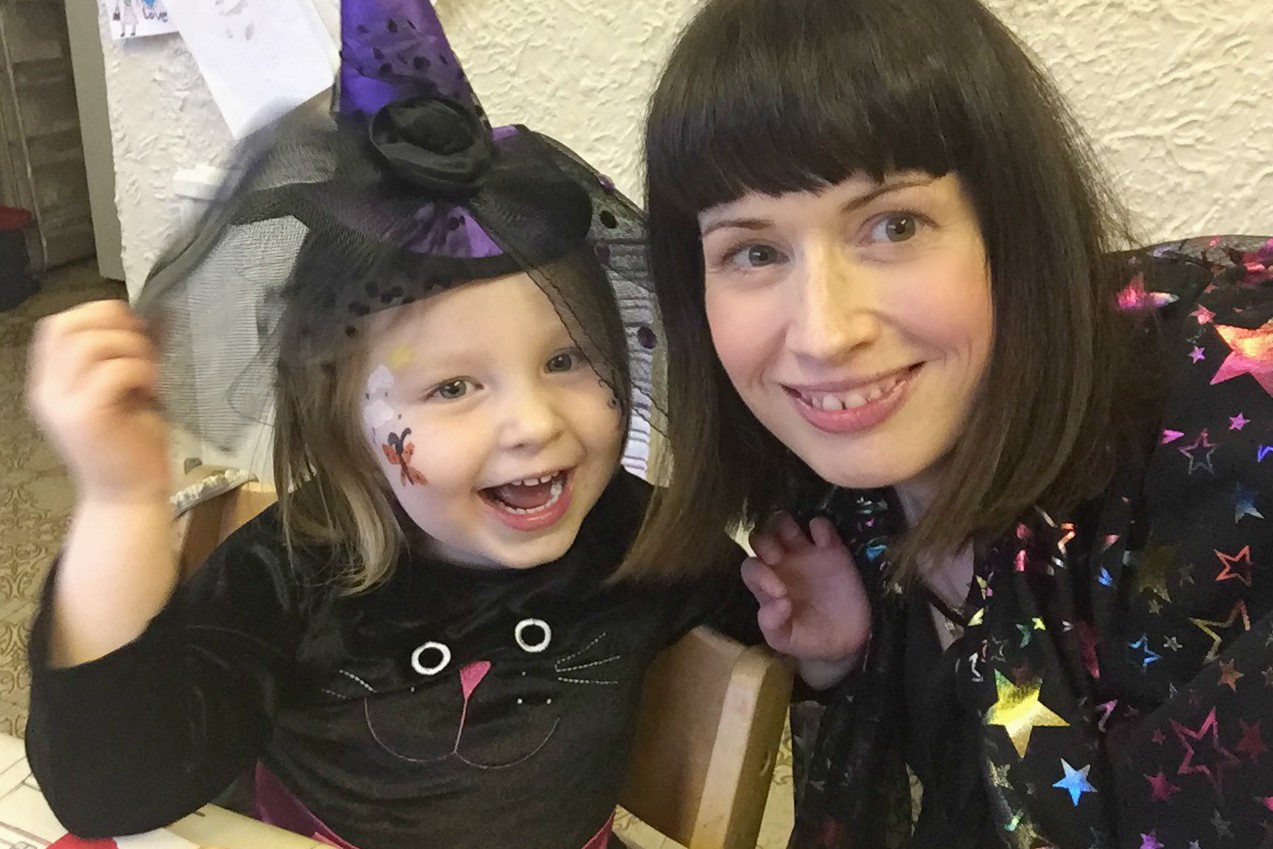 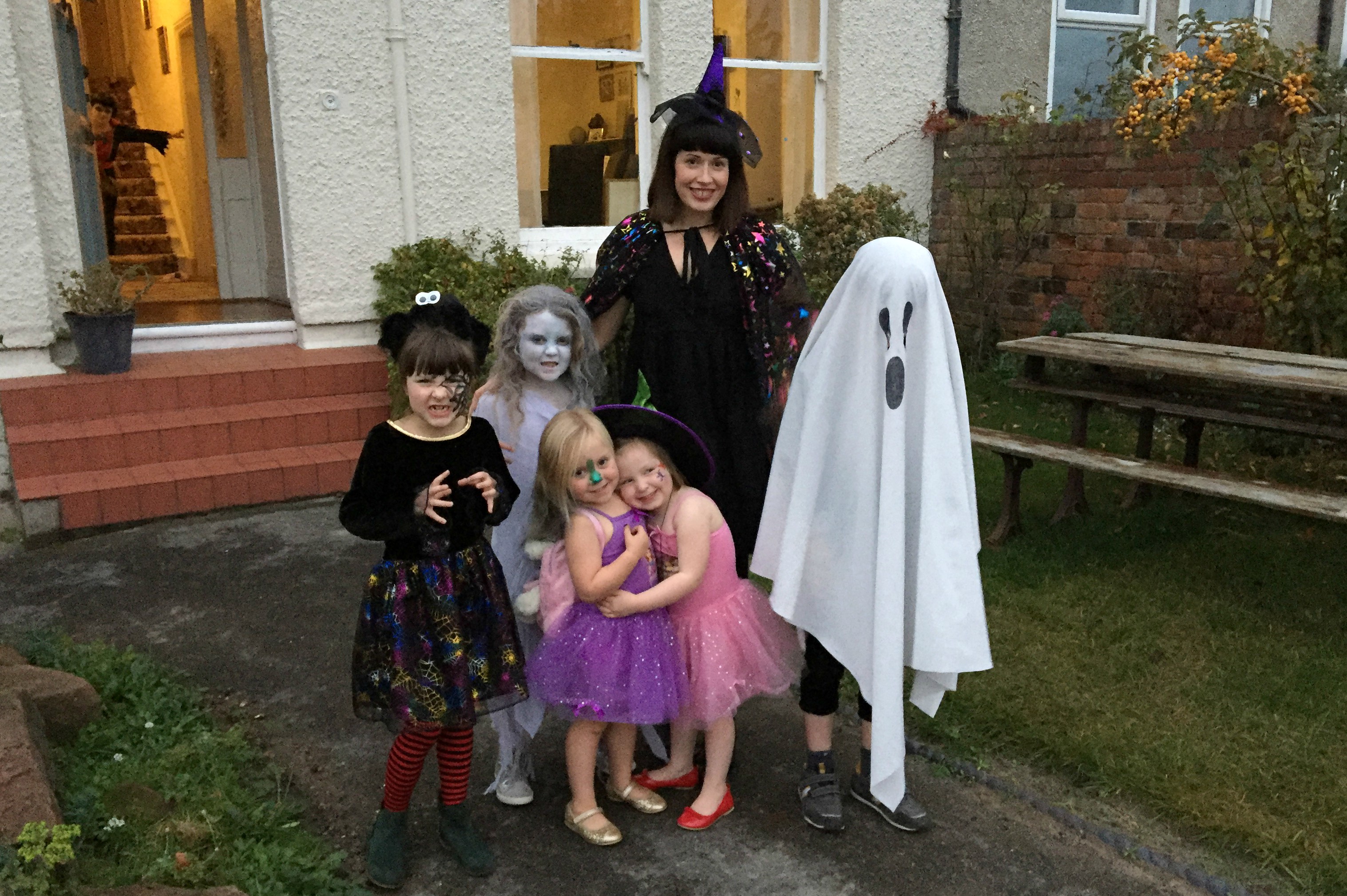 Sam is going to wear his third costume out of the four he has this year. Honestly, getting him ready is like preparing for a prom, he takes it so seriously and knows just how he wants to look. For our family photo he’s in the cat outfit he had last year, ignoring my suggestions that it was perhaps a little tight and a little short for a second outing! He put a homemade ghost outfit over the top later on, and tonight has announced he is going for the robot skeleton look, with white spray painted hair. Not so sure about the hair on a school night!

Flo really got into the dressing up this year too, and had three different outfits on on Saturday. She started in thus witch dress and hat, then changed into a black velvet cat dress, then decided to go out to the second party in a sparkly ballet dress instead. She was in her element playing with her best friend Eliza, whose house we stayed at in the Wirral over the weekend.

It was the first time we had been back since we moved in July, and luckily we had a pretty packed schedule which left little time for melancholy. It was nice being back near the sea, near our friends and near everything so familiar. We went down to the beach on Sunday to see where we scattered some of Roger’s ashes, always a special place for us and a place where I feel peace. 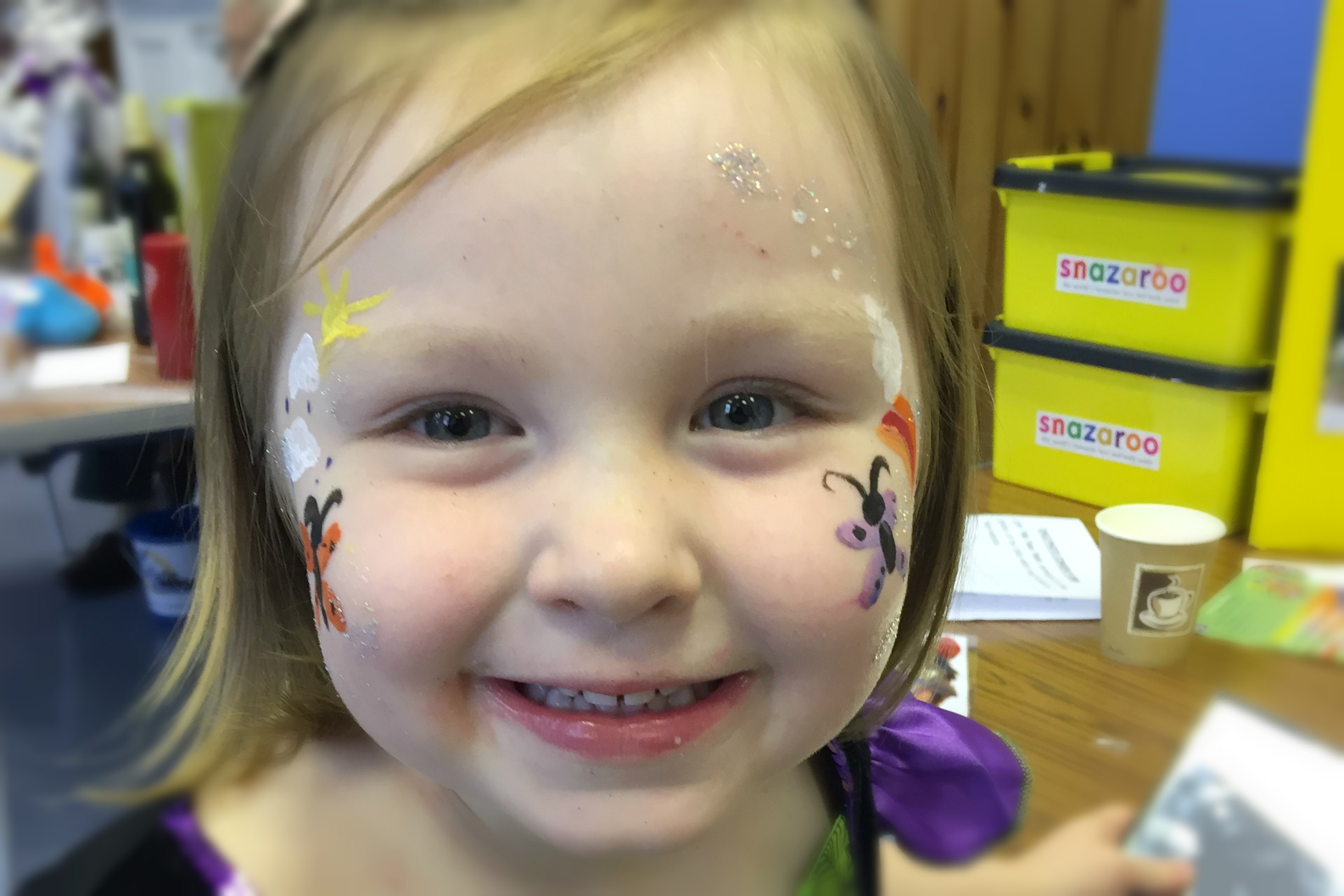 We went on to a surprise party for my mother-in-law, who turned 90 yesterday and is doing amazingly well. It was lovely to see everyone celebrating and surrounding grandma on her special day.

October seems to have gone pretty slowly, it has seen me go on a girls’ weekend away, have a few good nights out and some nice family walks. We are deep into autumn now which is one of my favourite times of year, although for some reason every time the seasons change I feel sadness that life is moving forward in a way I never imagined.

I feel moving over here was the right thing to do, I feel grounded here and as content as I suppose I can currently be. But I also feel lonely, and the sense of loss never eases as people say it might.

Once Halloween is over and Bonfire Night is done, life will be all about Christmas and it’s not a time of year I love like I used to. I know this year will be easier than last though, we have trodden that new ground and done the first Christmas, we’ve done the first of most things I guess now.

November has a few things in the diary but at the moment it’s looking quieter, I imagine it will be filled with lots of cosy nights in and catching up on some sleep! My problem is I feel so tired yet can’t seem to get myself to bed early or sleep in in the mornings when I can. My mind is wired! Perhaps more running will be on the cards on these cool misty mornings. 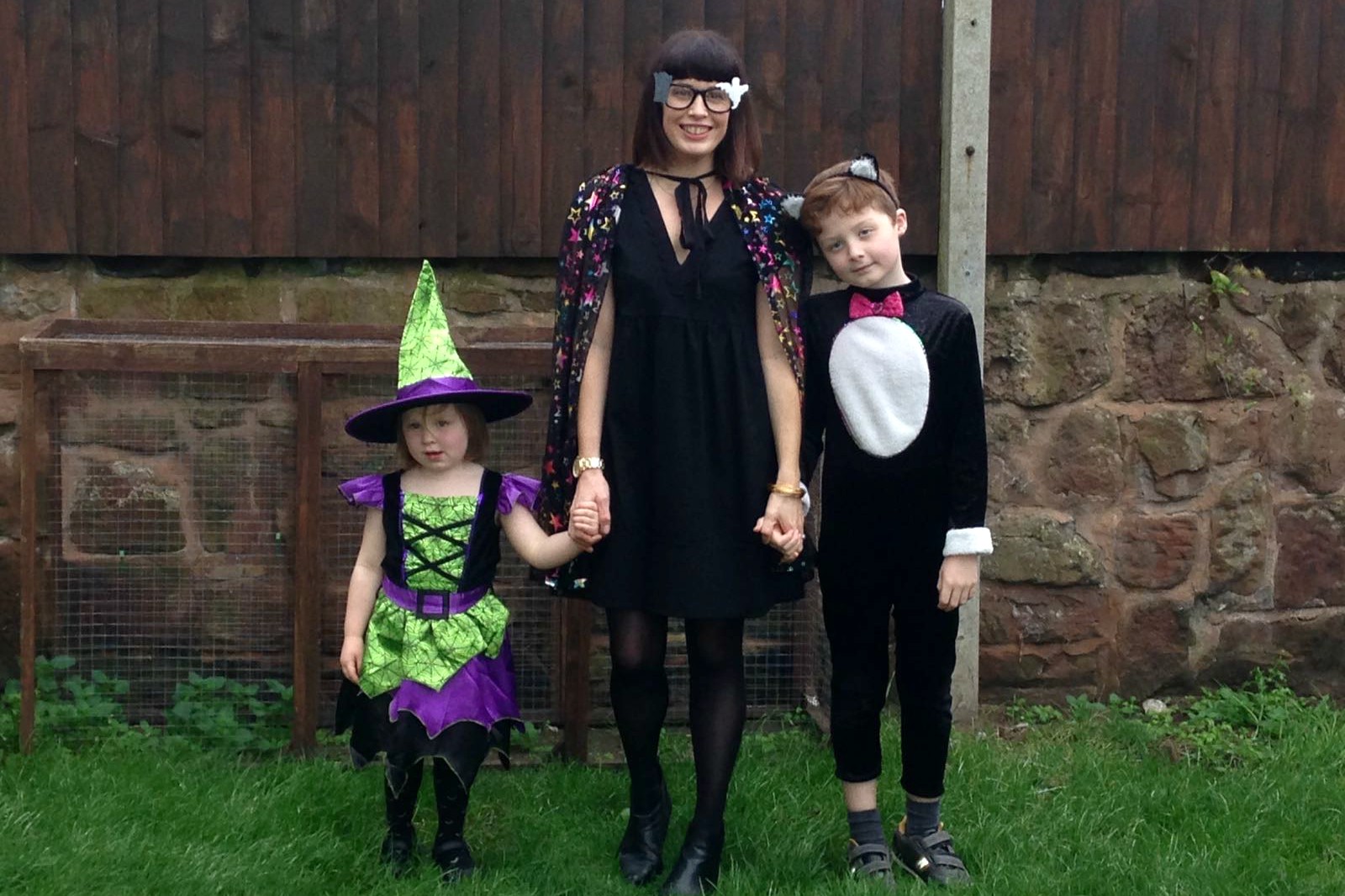 The Fifty Shades of Grey pun must have been used a million times before in posts about interiors, but it...