Our holiday in Carvoeiro with James Villas 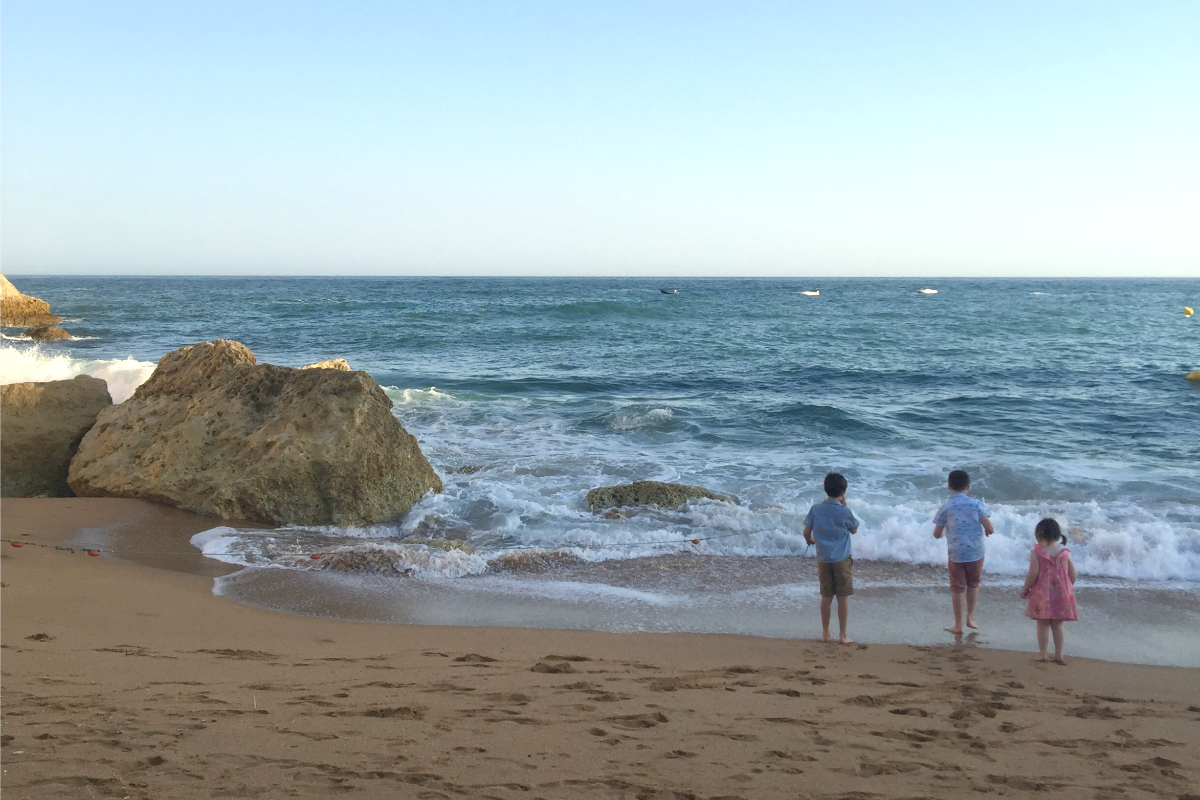 We’ve just come back from a wonderful week on holiday in the Algarve, and I must admit I am suffering a bit of the post-holiday blues. Who wouldn’t after seven whole days of sunshine, relaxing by our own private pool, discovering gorgeous new beaches, hanging out with my oldest school friend, watching our kids become great friends, opening the slightly sparkling local wine at lunchtime and generally just having a fabulous, relaxing time.

We spent the week in the Portuguese town of Carvoiero with James Villas after I was lucky enough to win a week with them through a blogging competition earlier in the year. I have to say, writing a review of my stay was not part of the deal and I’m not obliged to say this at all, but I am now a real James Villas convert as everything was just so good, it all went so smoothly, the accommodation was perfect and we really couldn’t have asked for a more perfect holiday.

The past few months have been particularly hectic for me – not to mention the past maybe three or four years – so believe me, a holiday like this couldn’t have come at a better time. We moved house – relocating to Yorkshire – just over a week before we went away and all that packing, unpacking and then packing again was really starting to get a bit much! It truly was time for some overdue rest and relaxation and luckily that’s just what we got. 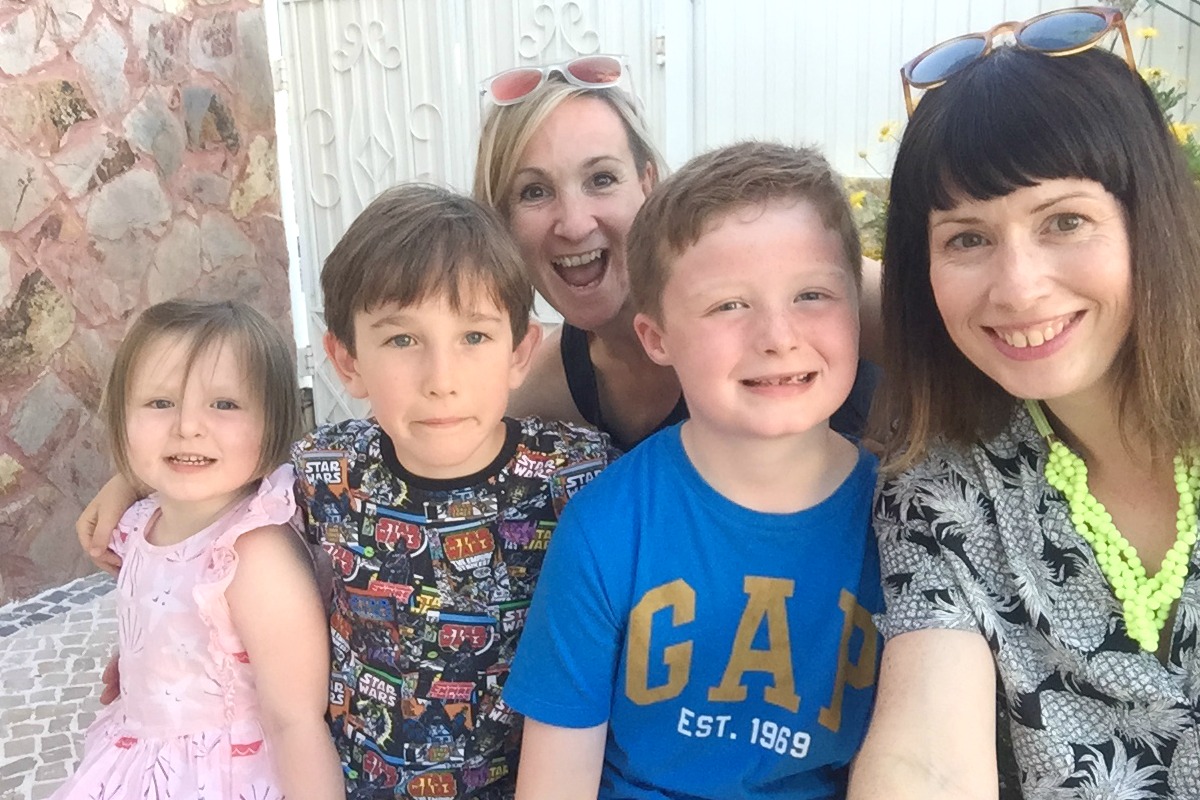 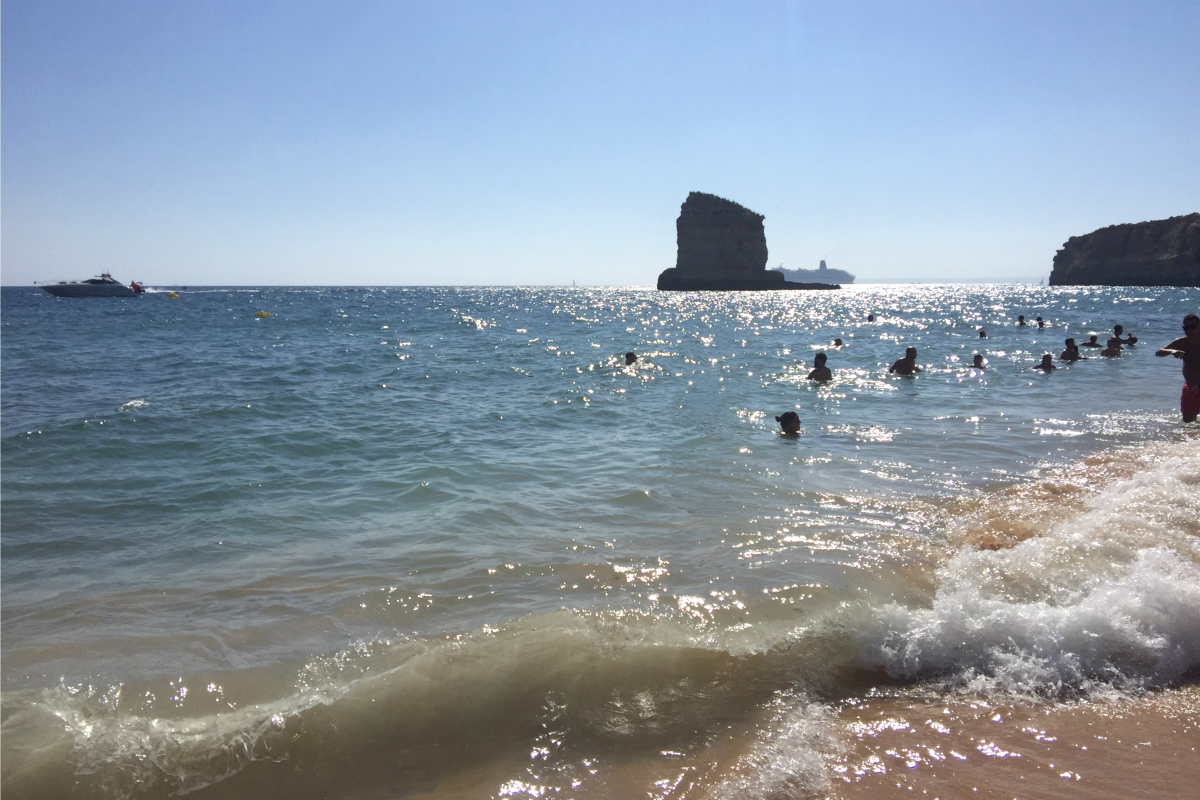 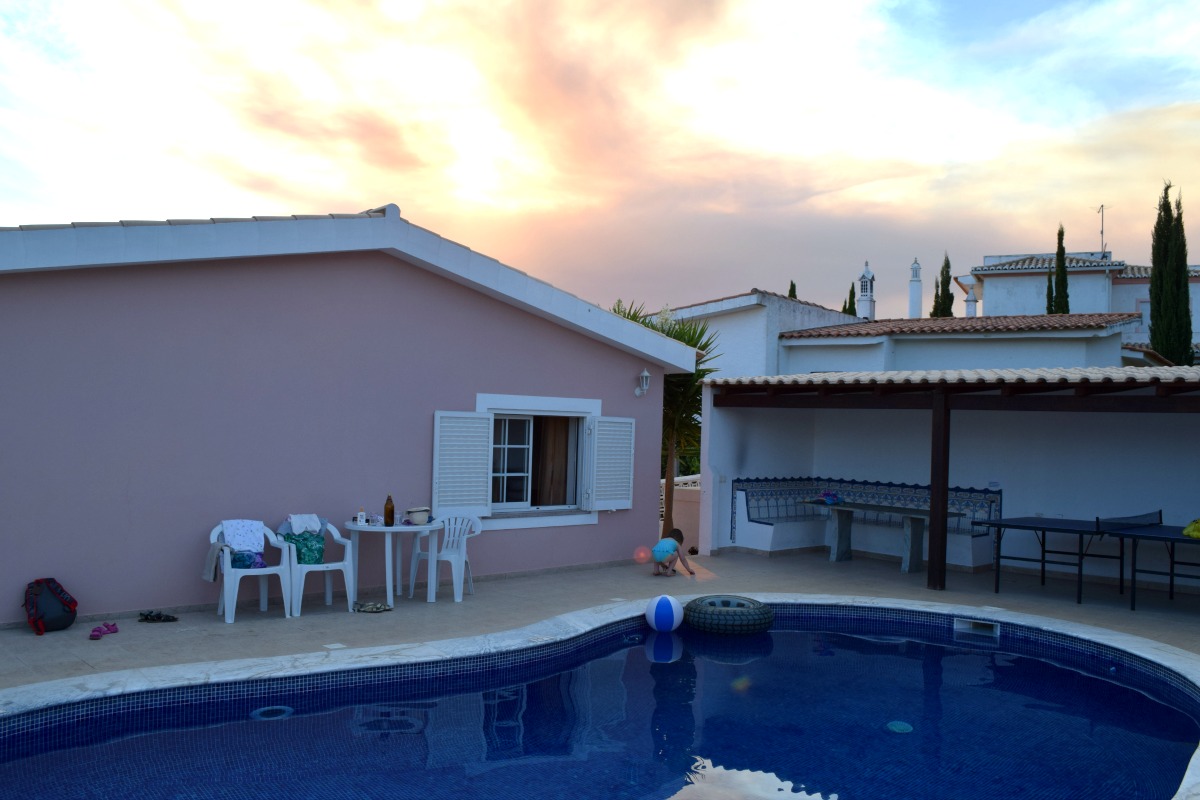 I know what you’re thinking – holidaying with kids is not relaxing! Well this time it really was, probably because it was a huge step down from the level of stress I’d been operating at, I had my friend Sally there with me to share the parenting woes, and our children Sam, Flo and Joe had each other to play with so were happy enough for the most part in their own little gang. Plus, not only did our villa have its own swimming pool, it also had a table tennis table, table football and inside there was a games room with a full-size pool table.

It was really hot, getting up to 40 degrees some days I’m sure, and the kids needed regular breaks from the sun as much as we needed regular breaks from them! So handily, when they disappeared inside to chill out with a DVD or have a game of pool, Sal and I managed a bit of time out on the sun loungers, doing a few lengths of the pool, reading or enjoying a glass of something cold.

Staying at Casa Prateada in Sesmarias just outside Carvoeiro we hired a car to give us the freedom to explore the local area. We found driving in Portugal relatively easy, the roads just seemed pretty quiet and the drivers generally considerate – most unlike last time I drove abroad when I was in Italy, which is a whole different ball game.

Having the car meant we could head out to some of the lovely little beaches nearby, spending a few hours there before heading either out to lunch or back to the villa for a relaxing afternoon cooling off in the pool. 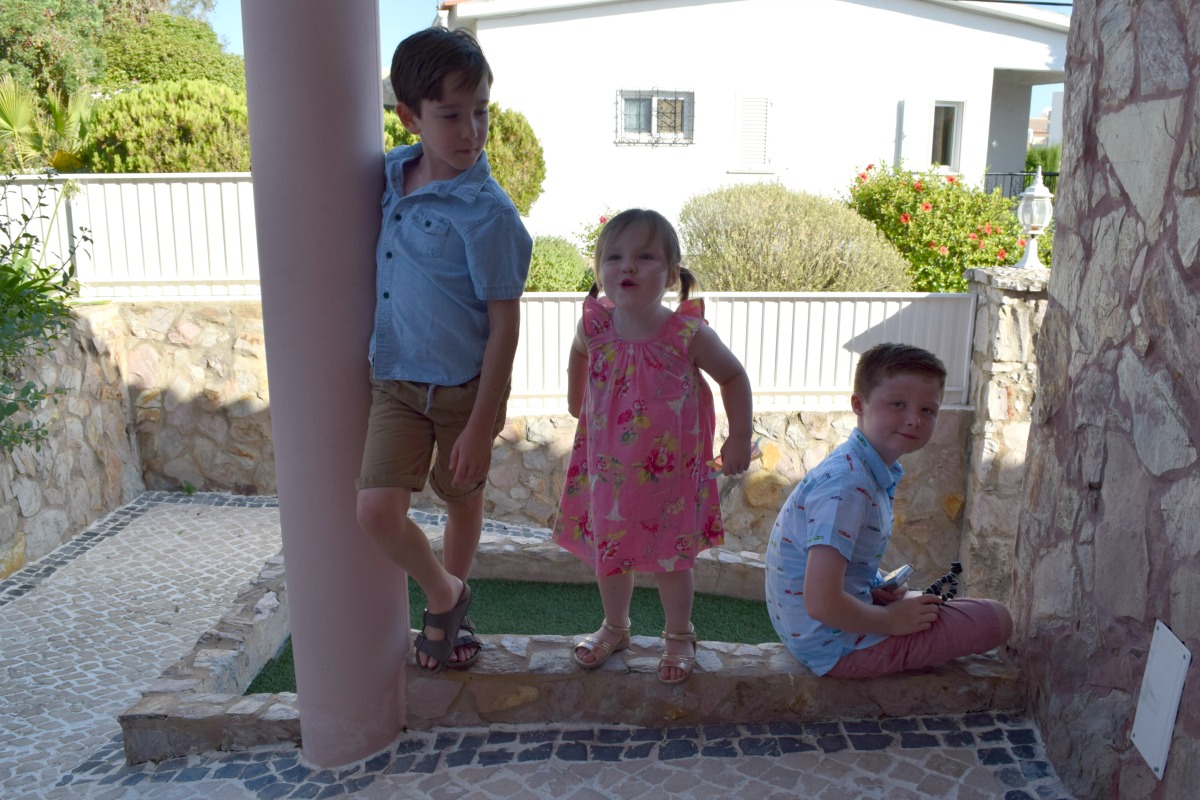 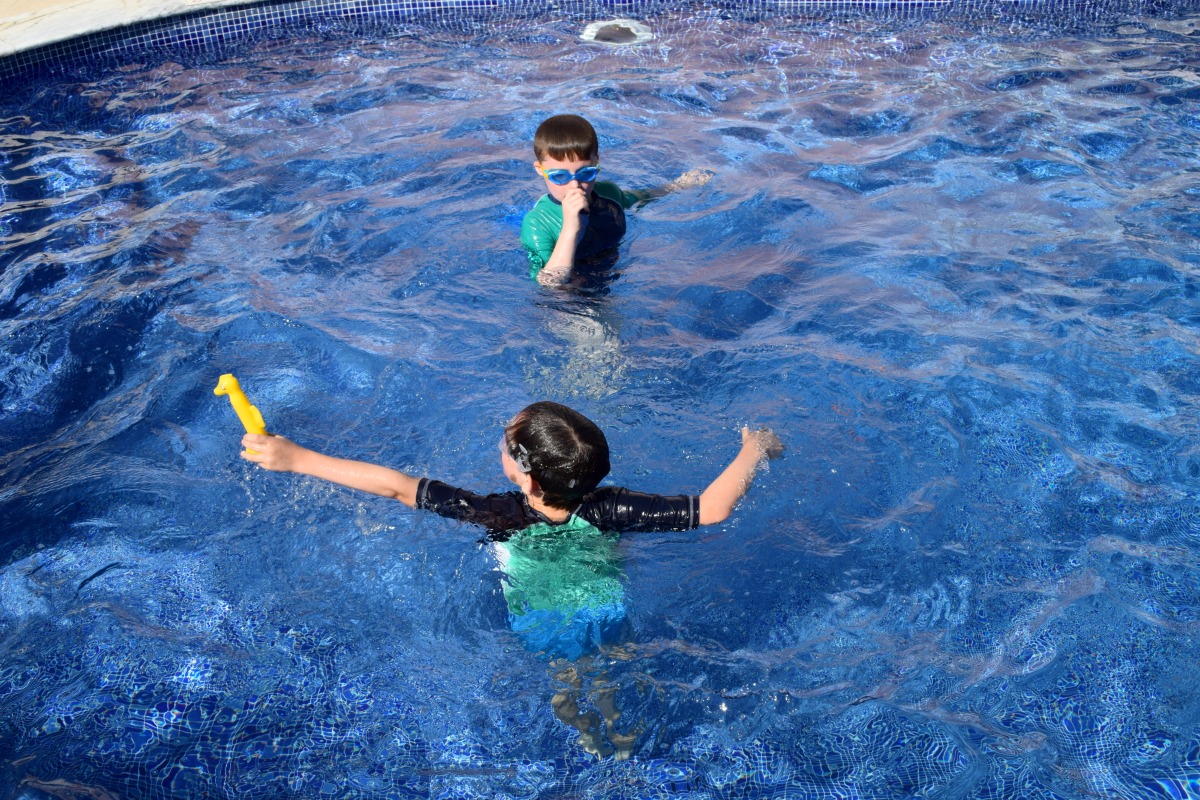 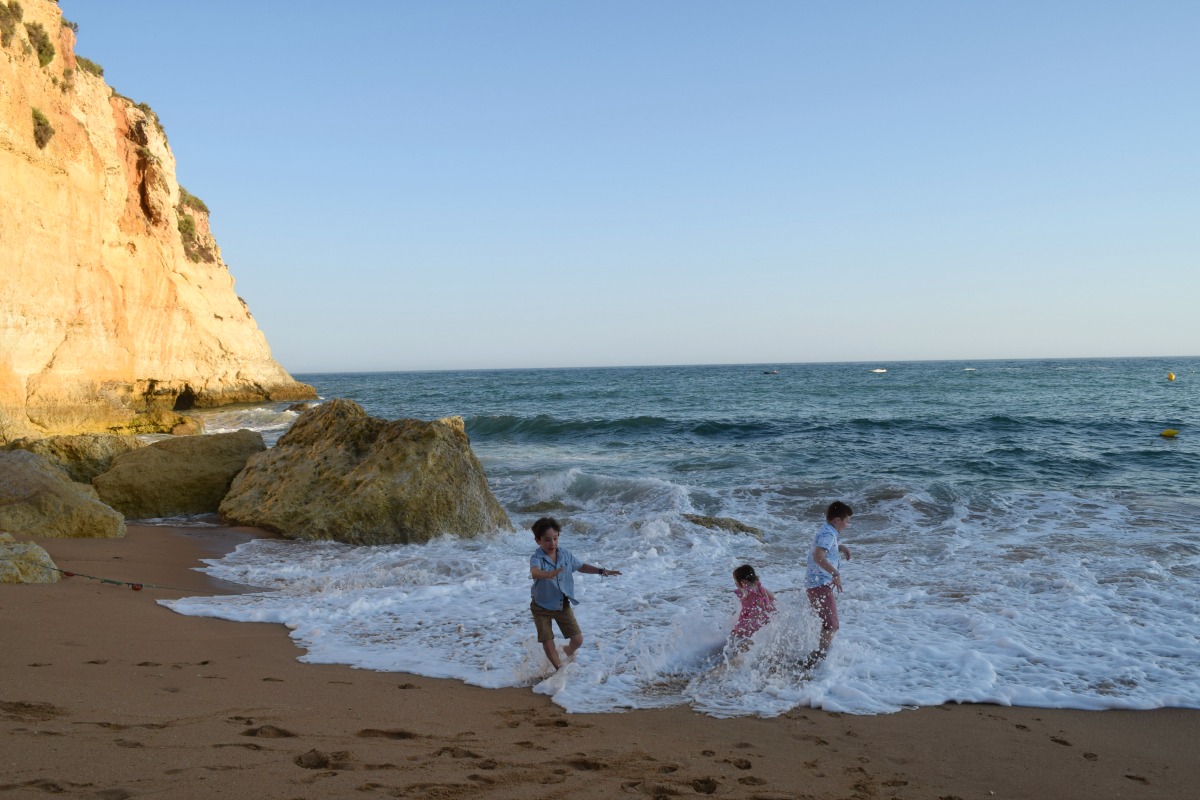 All the beaches we visited were less than a 20 minute drive away, Ferragudo (below) being one of the nearest. It’s a long, sandy beach which was brilliant for the little ones to paddle and watch the pedalos go in and out from the shore.

The great thing about this beach was the waves weren’t quite as huge as at the smaller coves so it seemed much safer for the kids to play in the water, jump the waves and collect shells.
There was also a really nice bar on the beach here where we stopped for an ice cream and espresso before heading home.

On the day we arrived we’d driven into Carvoeiro for a look around but it was a few days later when we first ventured to the beach there, arriving in the evening to explore when it was a bit cooler before going out to eat.

Walking down through a small square the beach opens up really near to the town centre, and its sunny cliffs and clear waters really are stunning. We walked down for a paddle but you know those huge waves I mentioned before? Well one swept in and knocked Florence off her feet, socking her from head to toe and covering her dress in salt water and sand! After a quick shopping trip to buy her a towel dress and she was good to go out for dinner, albeit slightly less ‘dressed’ than she was before. I think her main concern was whether she’d lost the new beaded bracelet she’d just bought from a stall in the main square. She hadn’t! 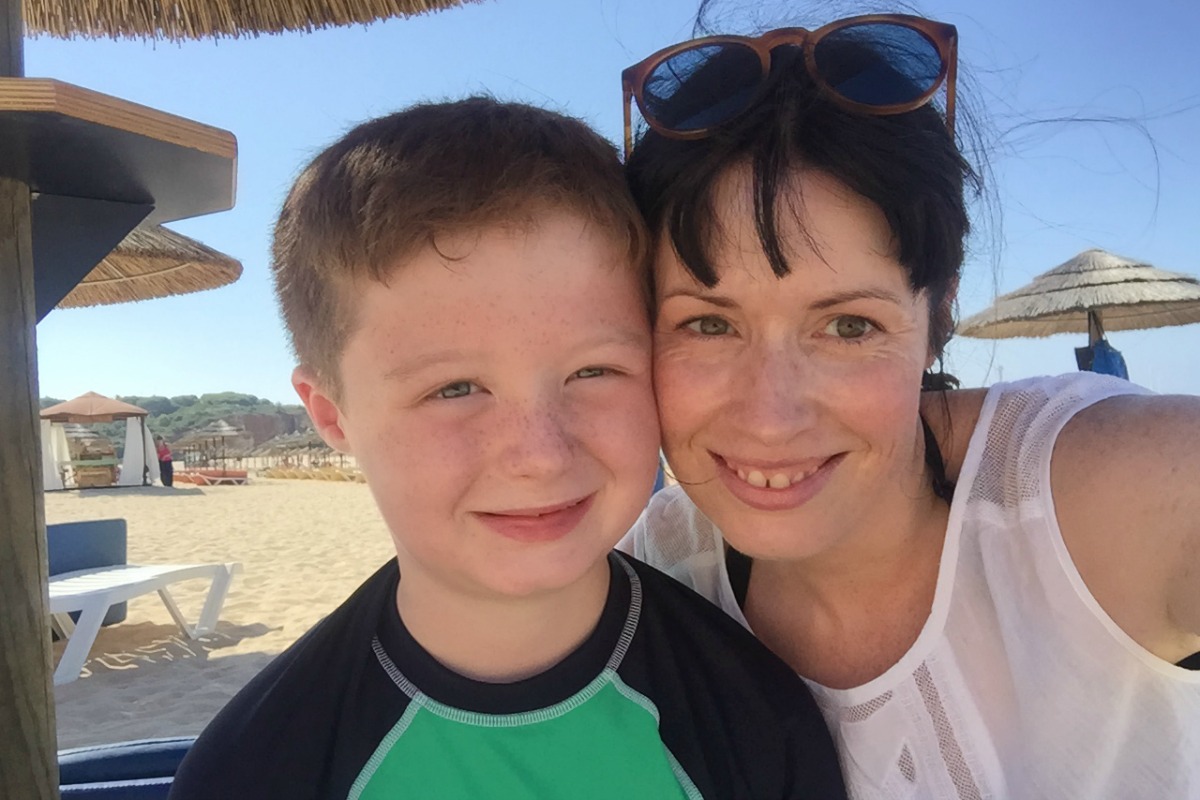 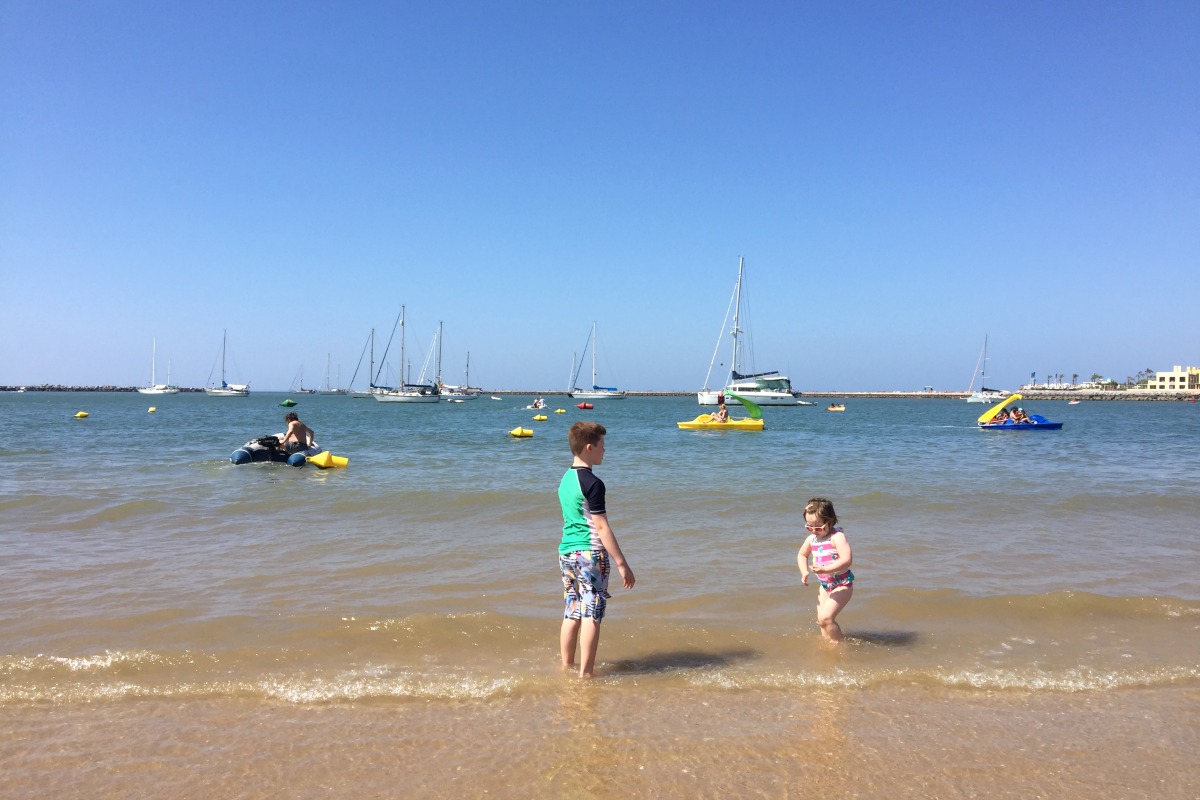 Another beach near to Carvoeiro is the beautiful Caneiros, a stunning setting which again has these tremndous waves in the sparkling sea but also has the most chi-chi bar I saw throughout the while trip.

As you walk down to the sea from the tiny car park, you go through the bar with an adjoining restaurant which apparently boasts the best seafood in the Algarve. We didn’t get to try it, as travelling with three children did not look like it would mix with the sophisticated beach bar vibe, complete with four poster beach beds, house music and listings for their full moon and summer parties.

Still, hanging out on the beach was more than enough for us and we settled down on the sand to watch the boys do some serious wave jumping while Flo chilled out on a parked up pedalo, making herself look a bit like a mini film star. We walked up and down the beach and it was clearly really popular with the locals and still pretty busy (but not too busy) at about 6pm. 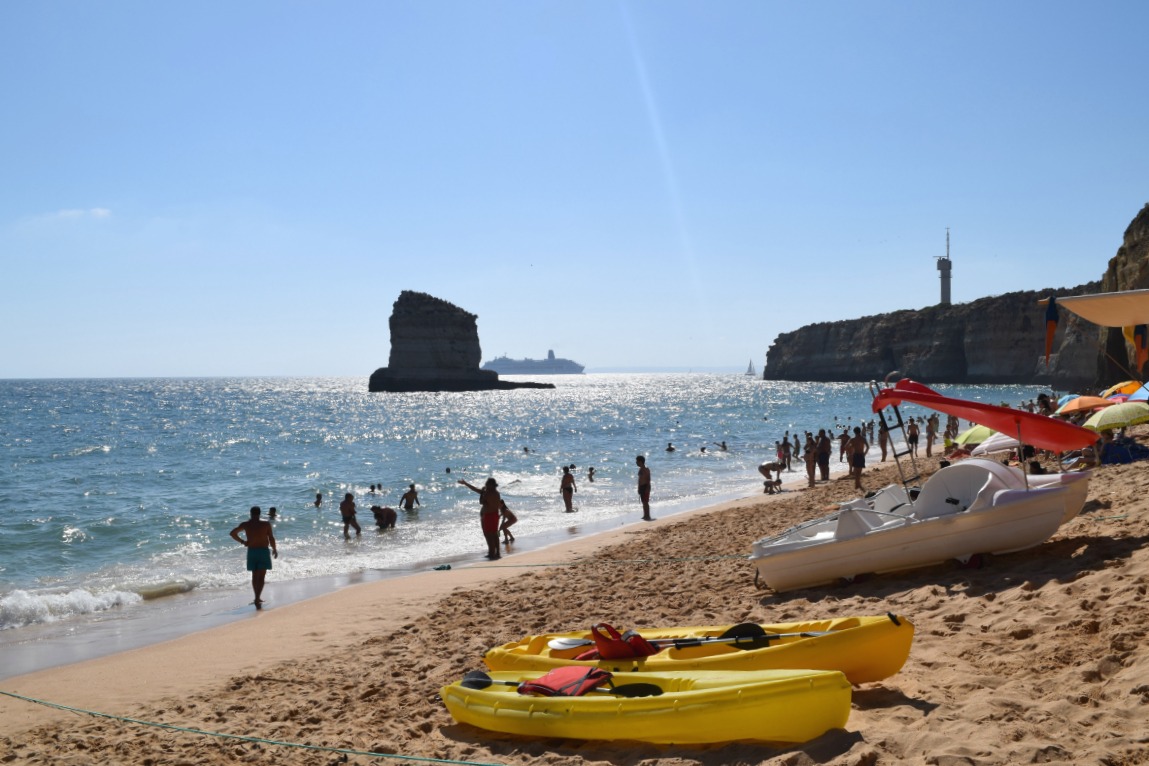 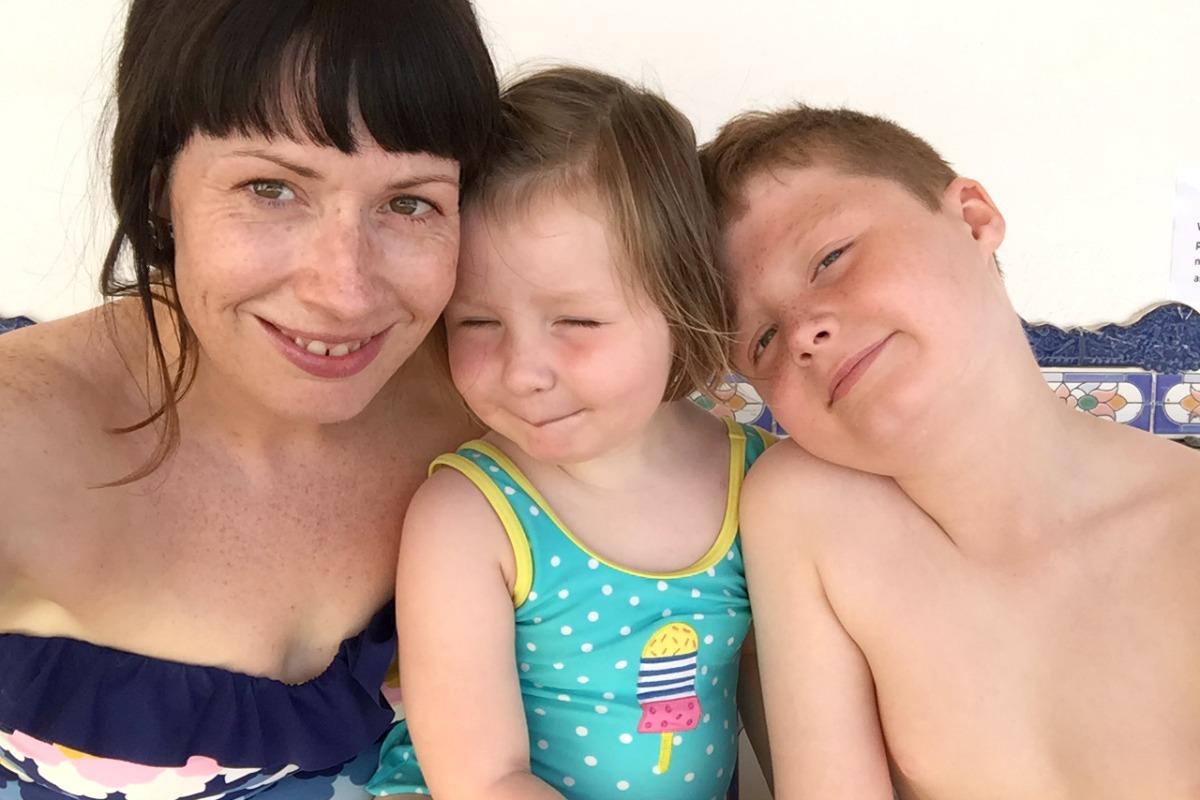 Probably my favourite beach of the holiday was the cove at Benagil. We went there really to try to take a boat trip around the caves that line the coastline, but sadly the sea was too rough for the boats to go out so we had to make do with playing on the beach instead.

We braved some wave jumping though, and managed to collect loads of really nice big shells – especially the ones that were washed up with the big waves and hit us on the ankles! It was at Benagil too where we saw a sea cucumber on the beach, a pretty dark-looking slim thing which led to a lot of staring and wonder from the kids.

It was my first time in Portugal, Florence’s first time abroad and the first time we had flown with our friends (the last time we holidayed together was in Filey, on the Yorkshire coast). It was a special break in many ways and one we all needed I think, to take some time out and just enjoy ourselves. The last holiday I’d had abroad was the one I wrote about to win this one, when we went to Uzes in southern France in 2012. 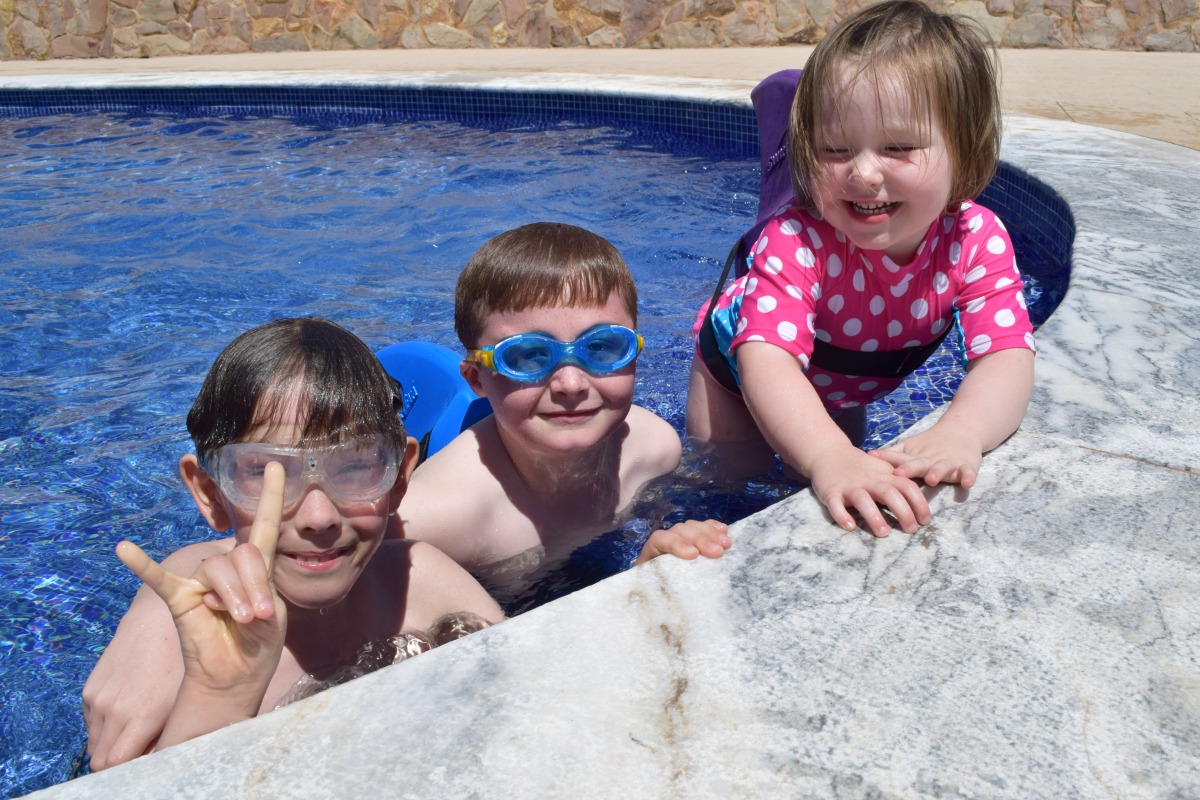 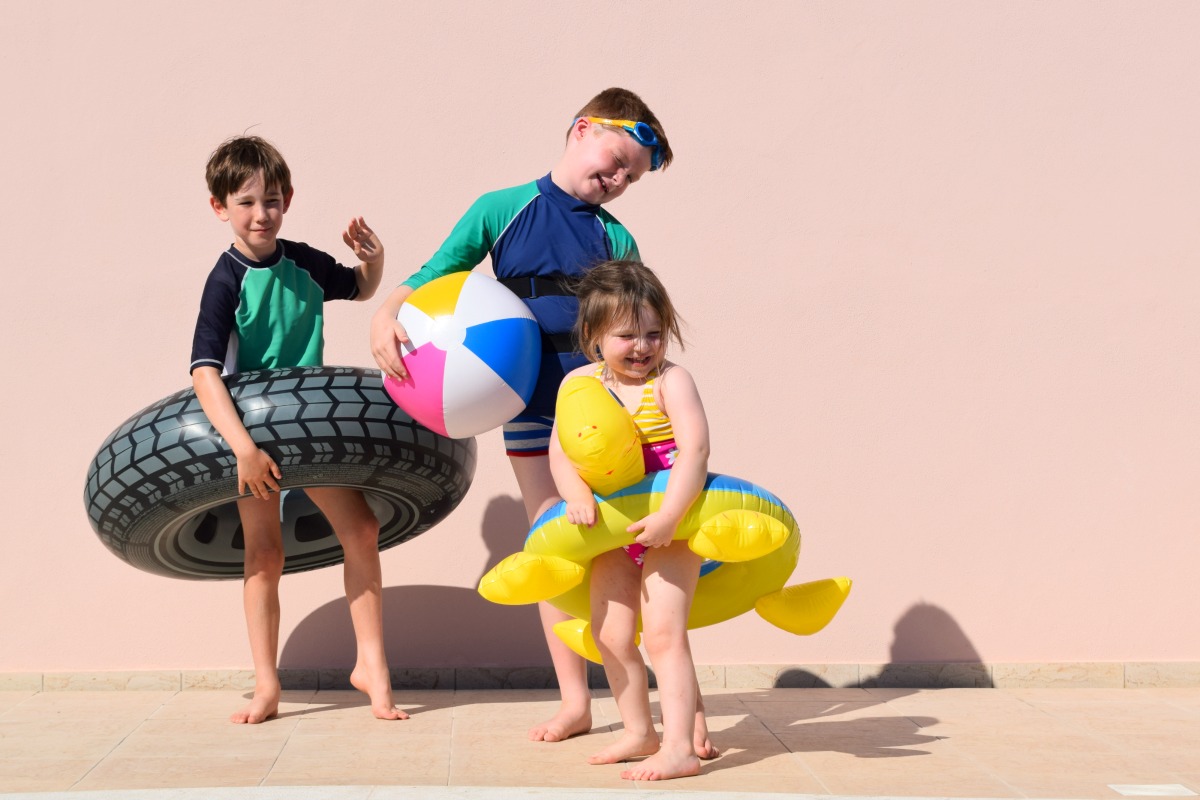 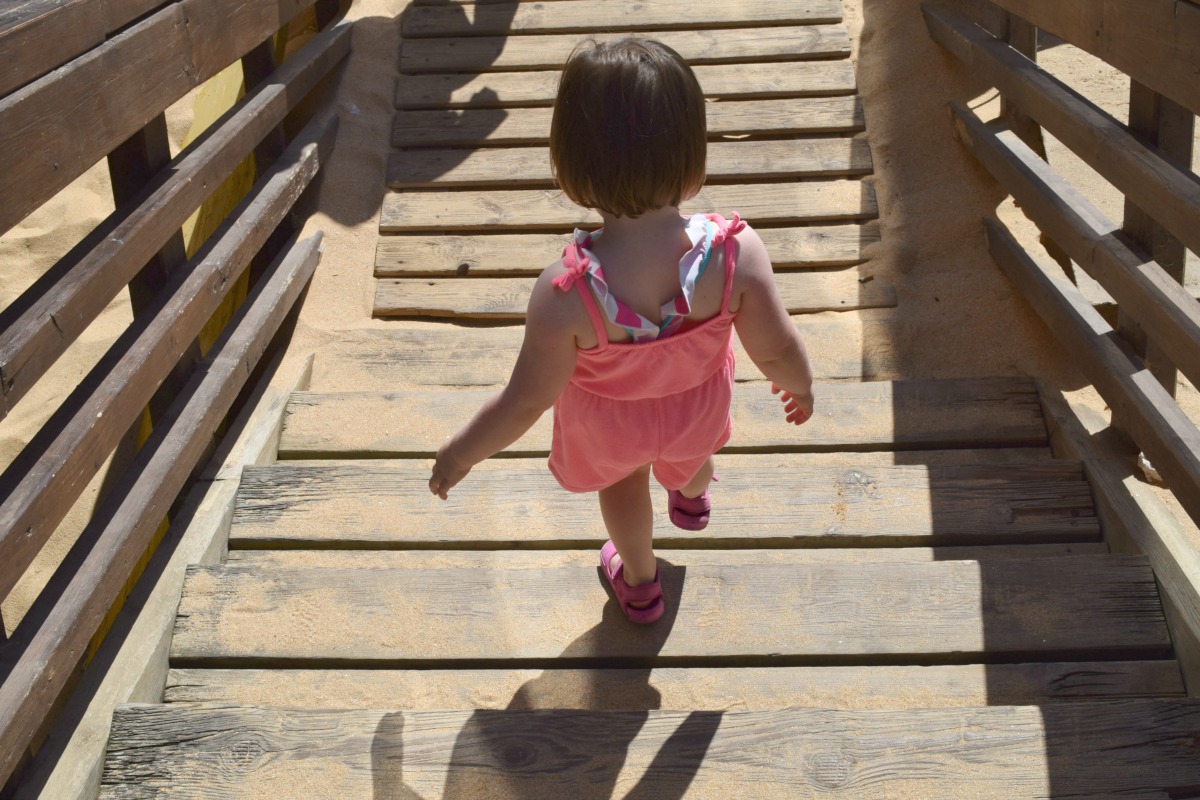 So much has happened since then, so much sadness and loss, and this trip away was more than just a holiday for me. It was a chance to feel some positivity, some sun on my skin, some time to just be, to think and to breathe. It was like breathing out after so long holding my breath. It reminded me how much I need to take some time out when I can, and how lucky I am to have such amazing friends and my two gorgeous children. Bringing them up on my own is not easy, but sharing the load a little bit helps so much. It made me laugh that towards the end of the week they were both saying ‘Salleeeeeee’ as much as ‘Mummeeeeeeeee’ when they wanted something!

We were sad to pack up and leave the villa, which had been our home from home for the week. It was such a spacious house, with more than enough room for all of us plus one double bedroom we didn’t even use. There were four bedrooms, four bathrooms, two dining tables plus a gorgeous tiled outside eating area. It was spotlessly clean, really well-equipped and with plenty of room to spread out without feeling on top of one another.

Flo and I shared the biggest bed I’d ever slept in which she nicknamed the princess bed, and the boys loved sharing a room and managed to get some sleep in the process. The bedrooms all had air conditioning which was really handy as getting little ones to sleep in the heat can be extremely trying! 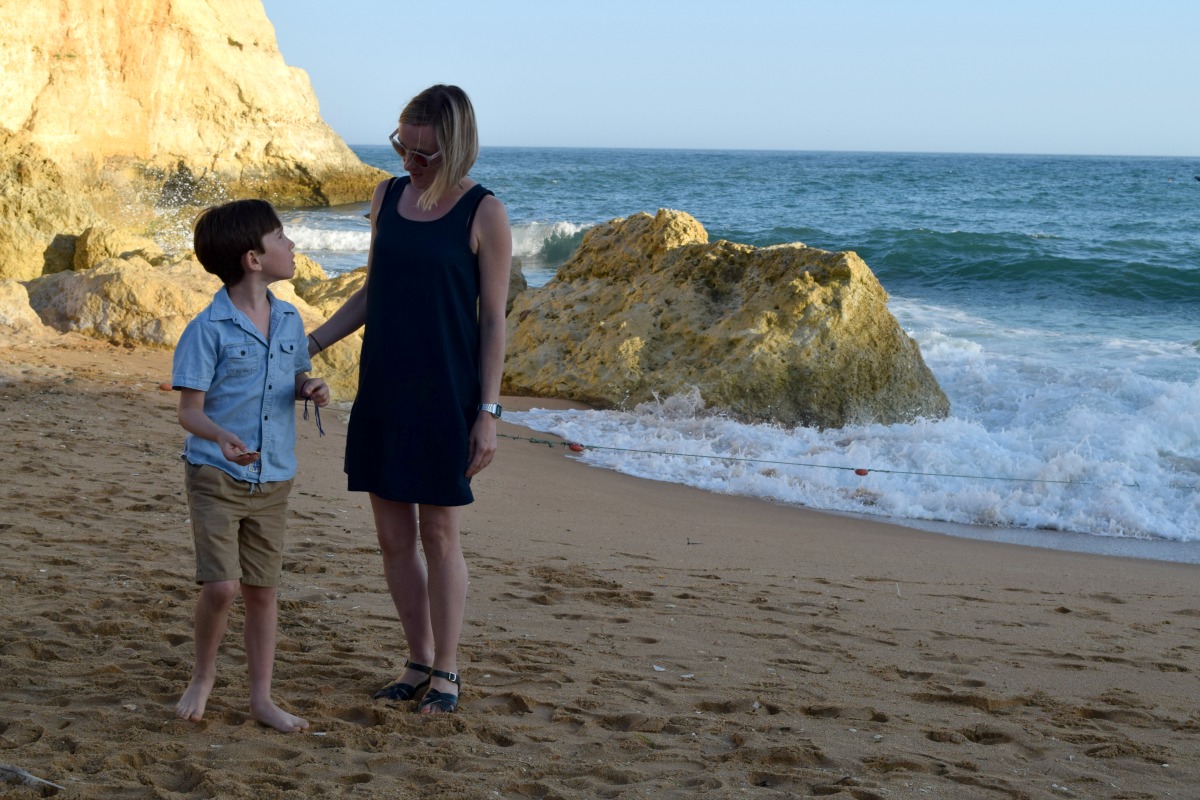 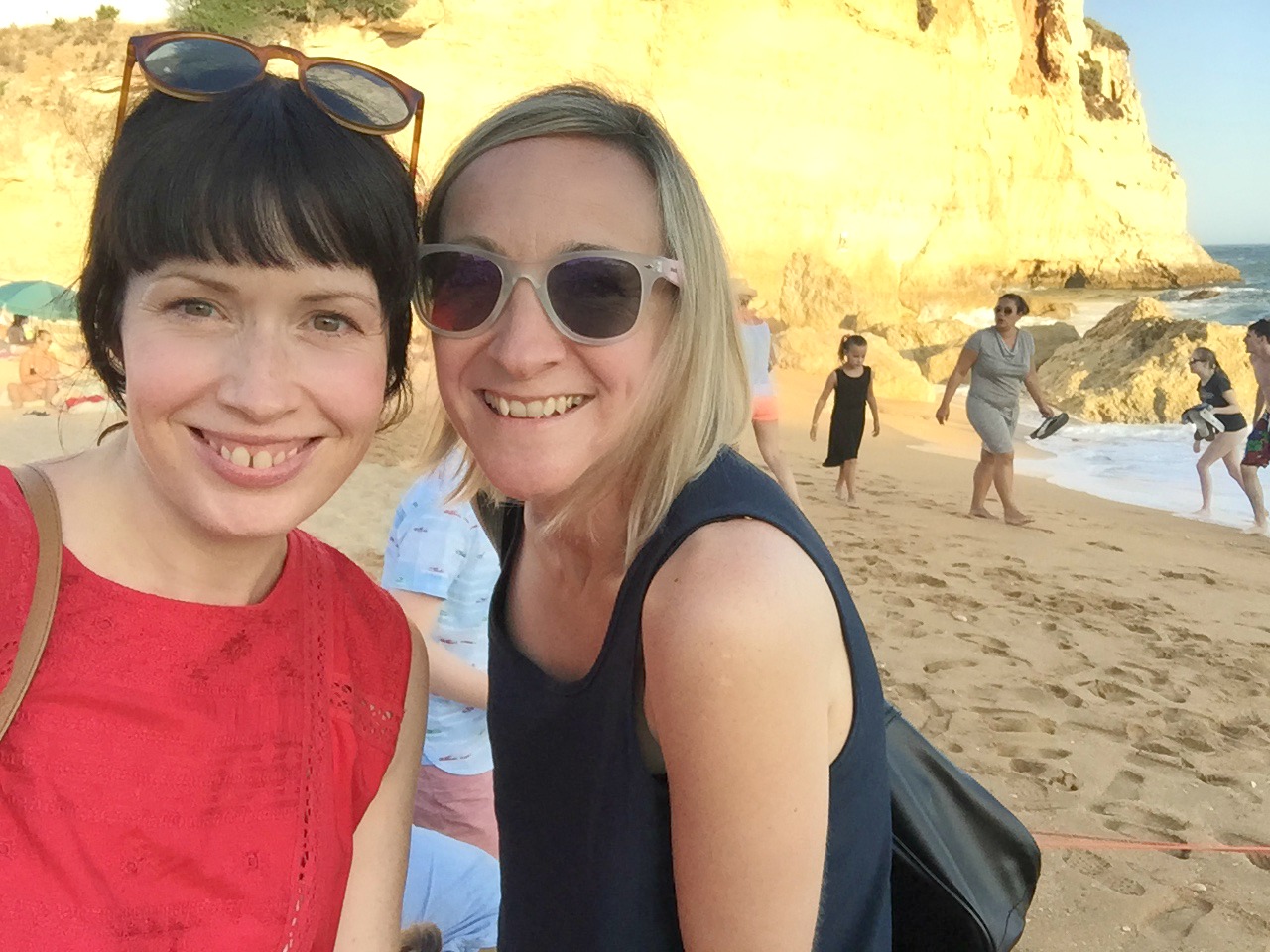 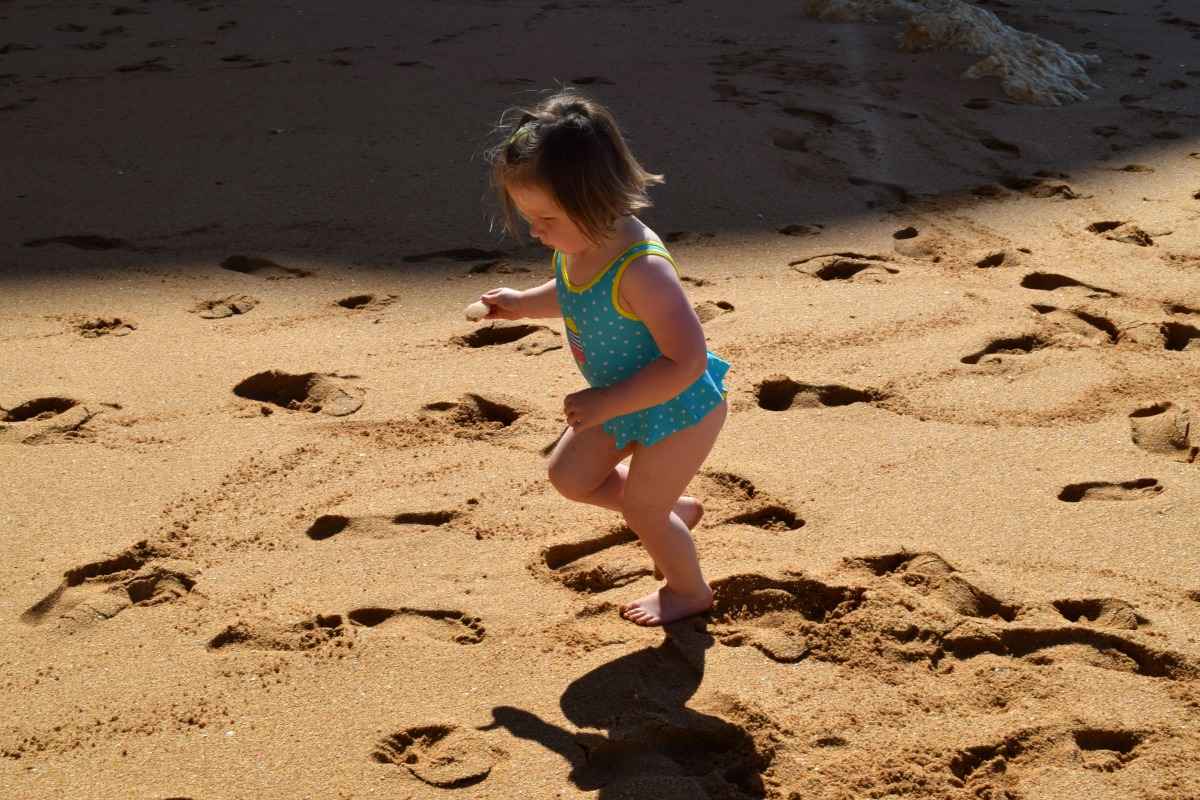 Casa Prateada was about an hour’s drive from Faro airport, an easy drive along the motorway in a diesel car which was spacious and really economical. The flights both ways to and from Leeds/Bradford were great, and we even had a tour of the cockpit when we arrived in Portugal.

The whole holiday was just perfect, and all I know now is I need to start looking to book another. Isn’t that the only way to beat the holiday blues? 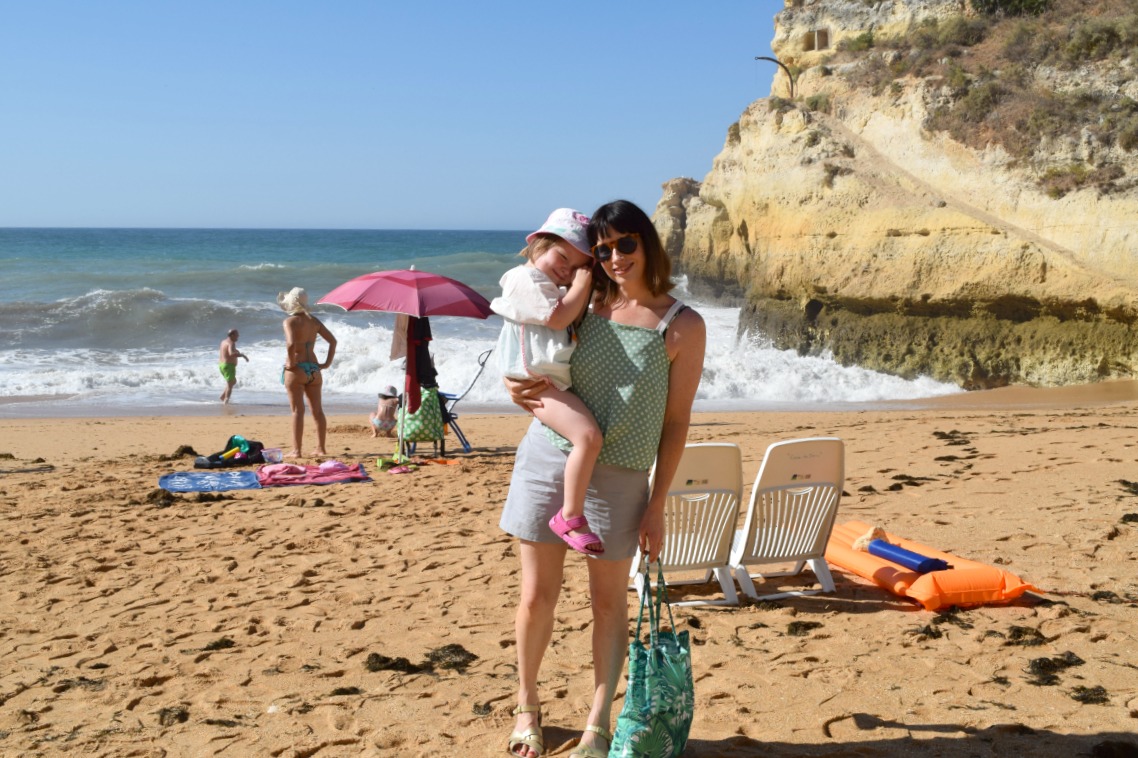 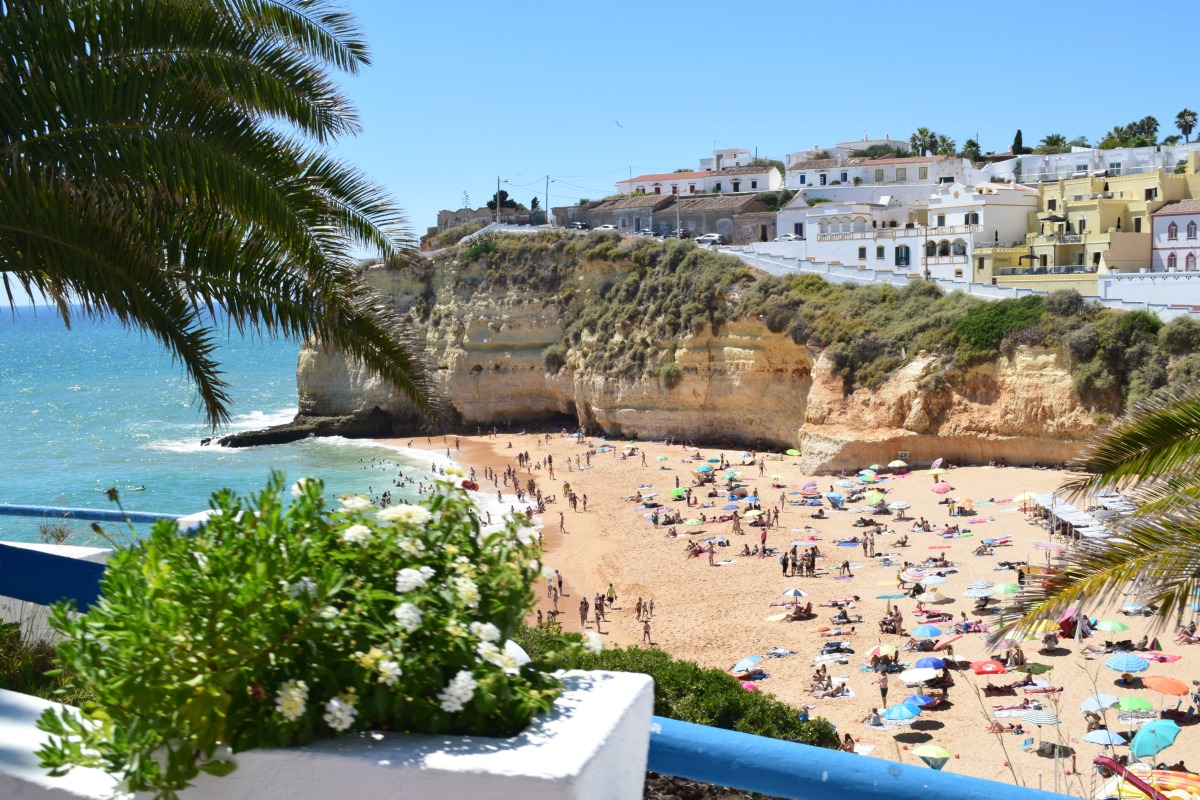 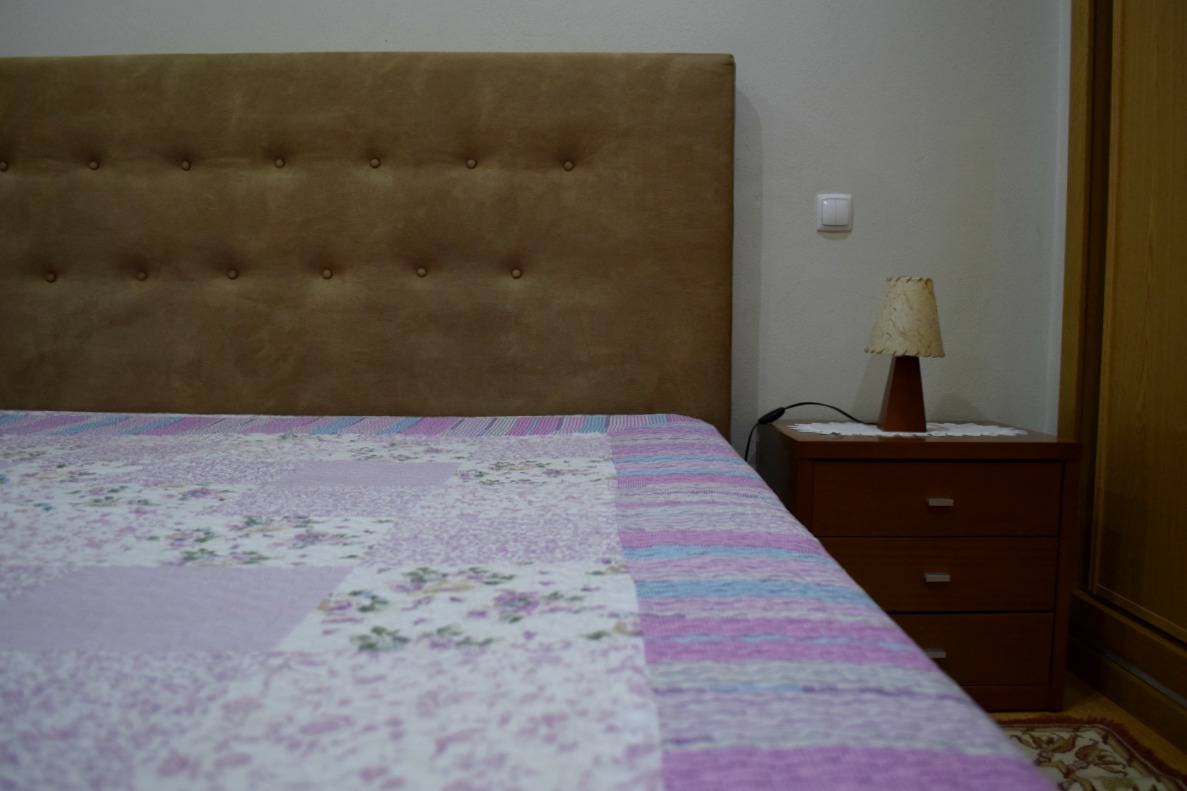 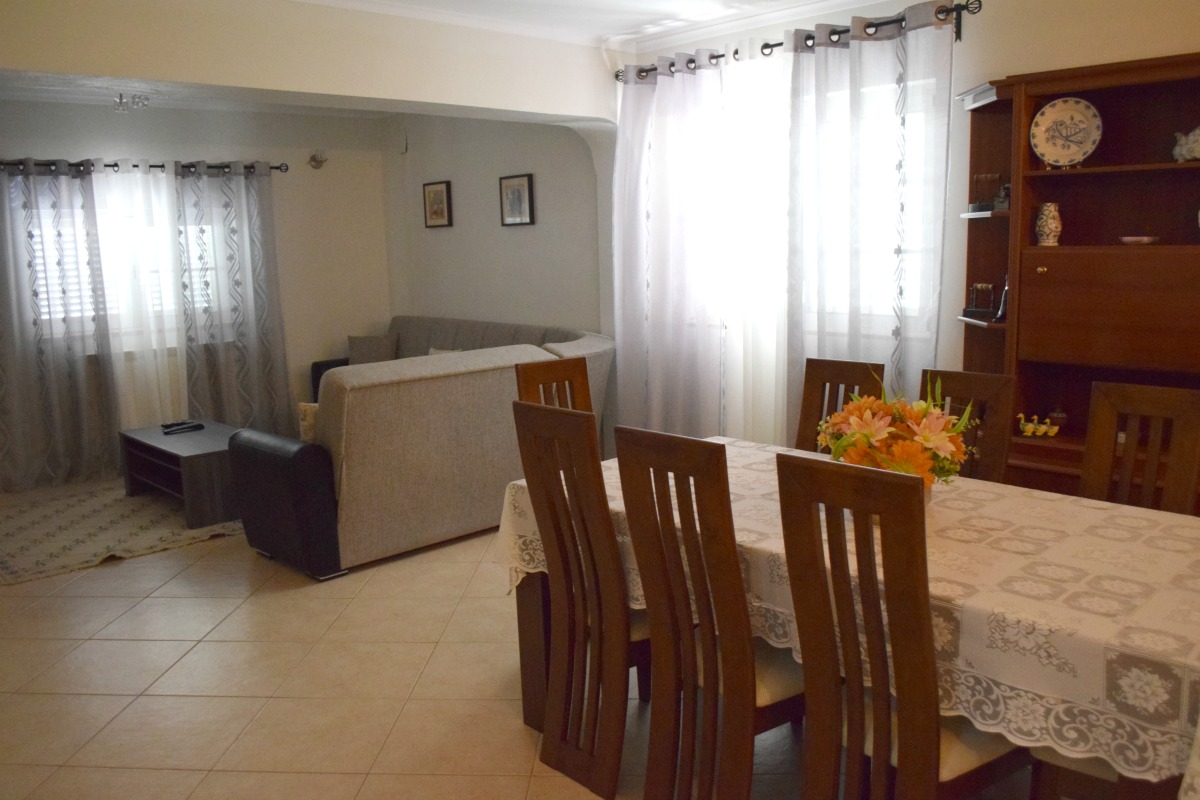 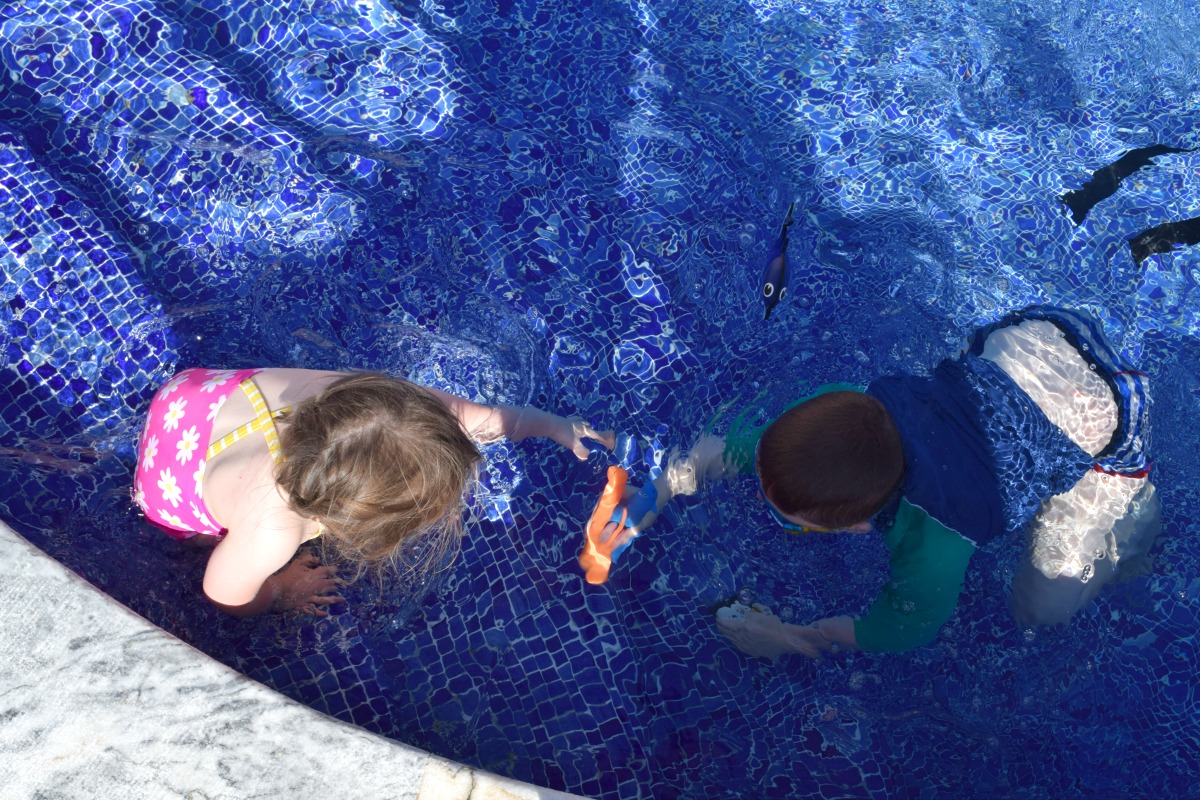 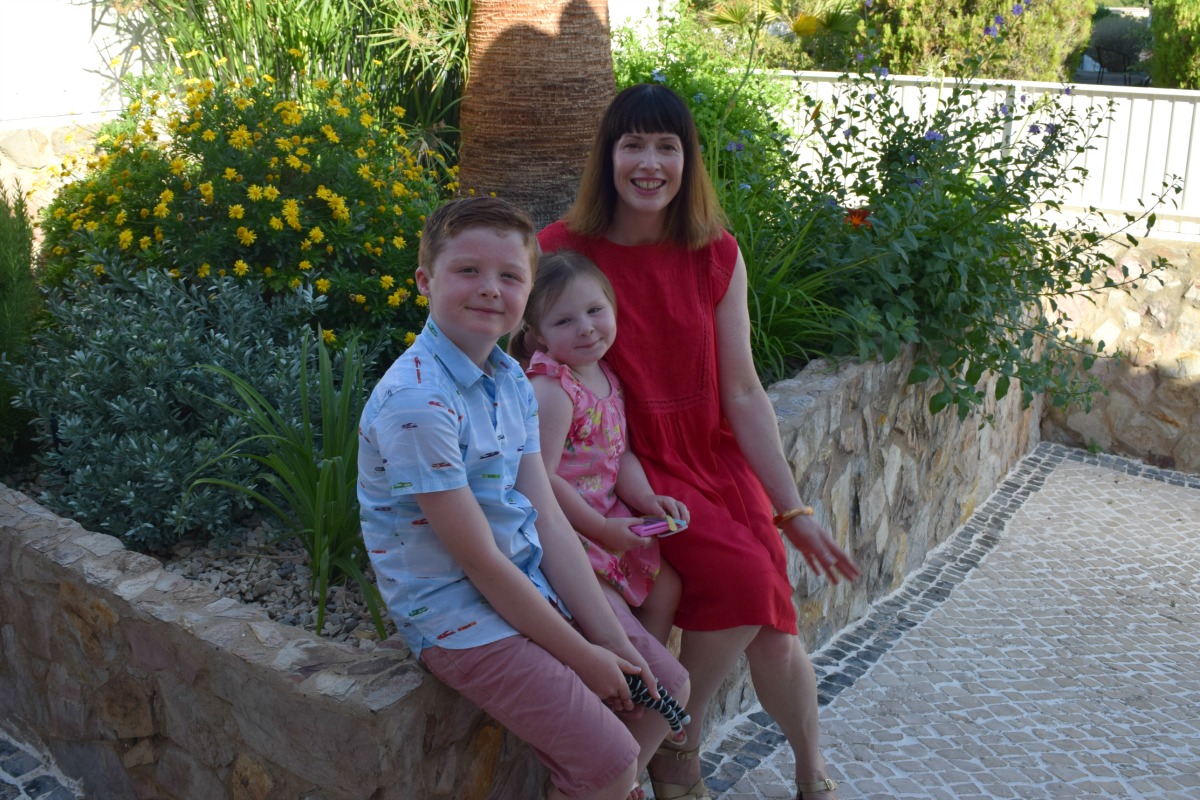 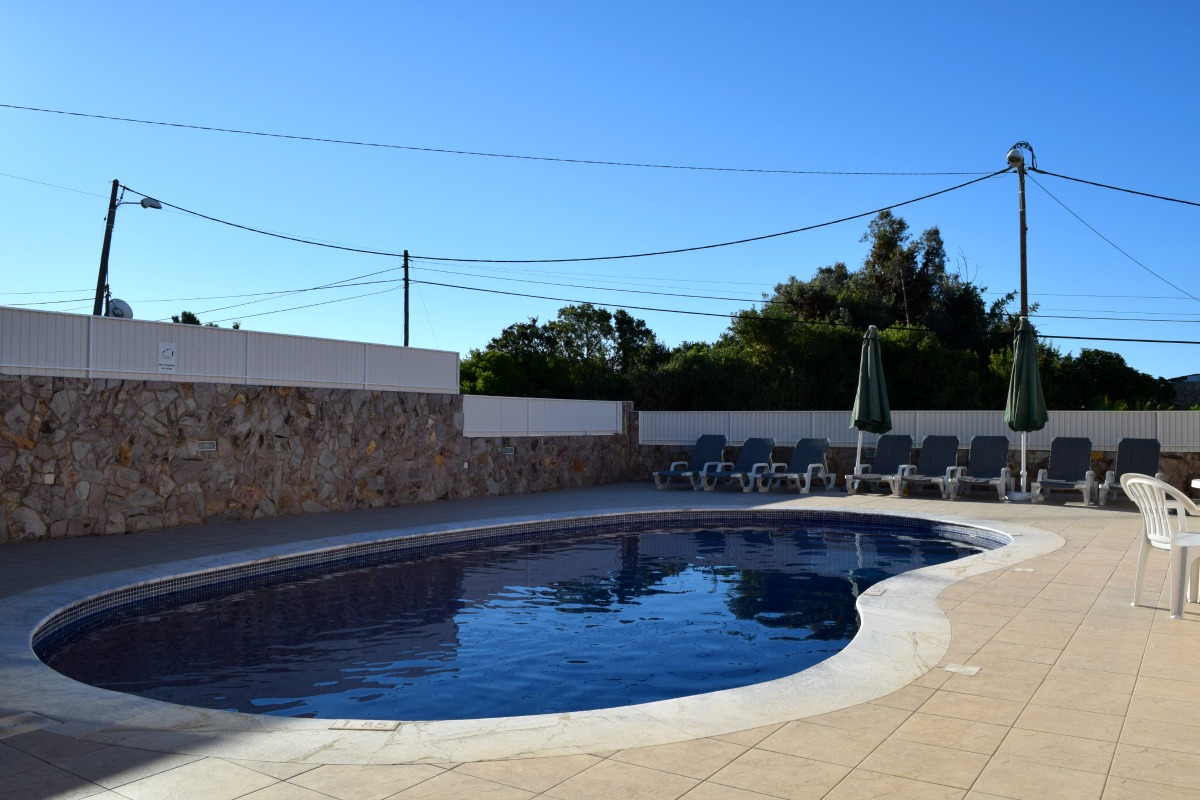 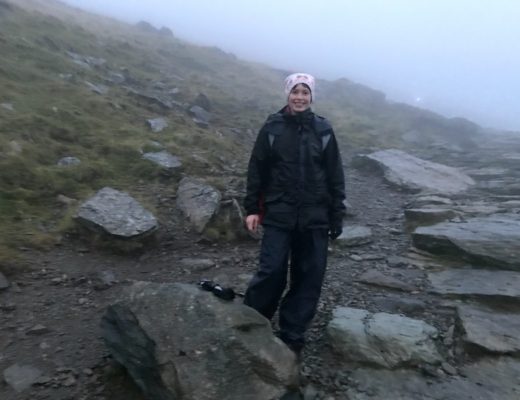 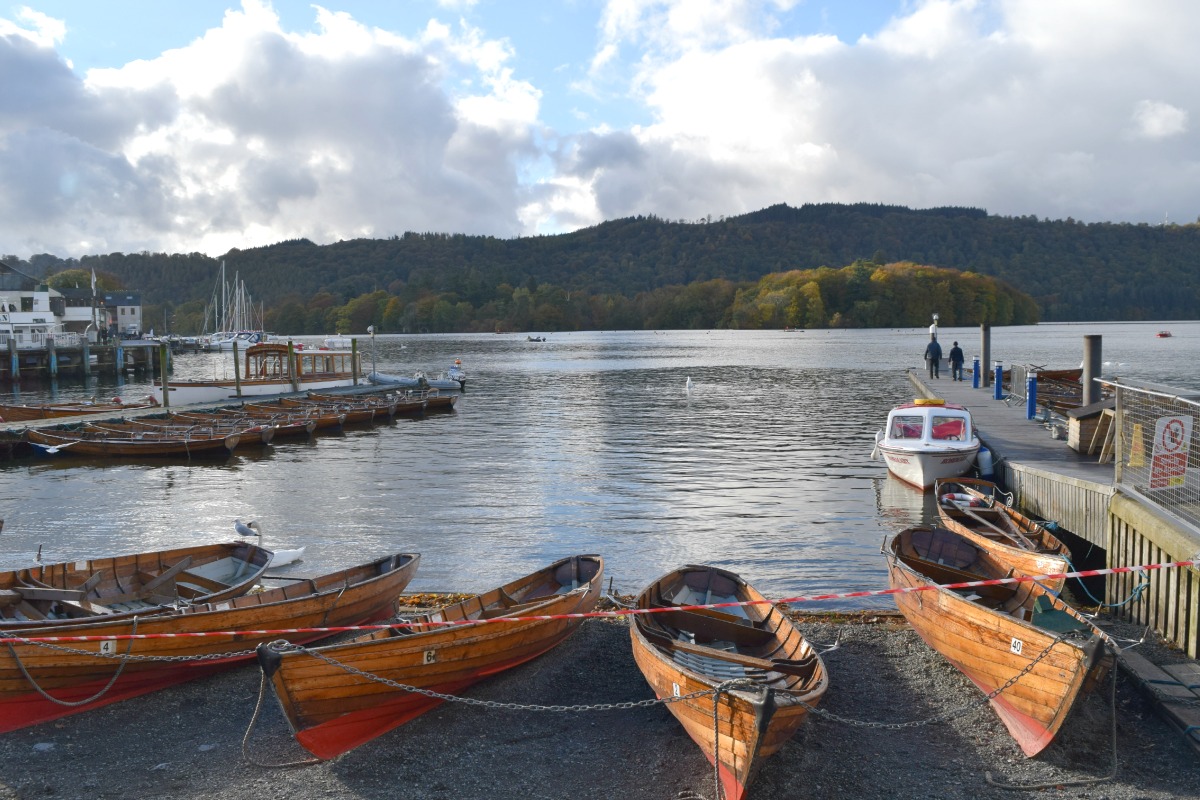 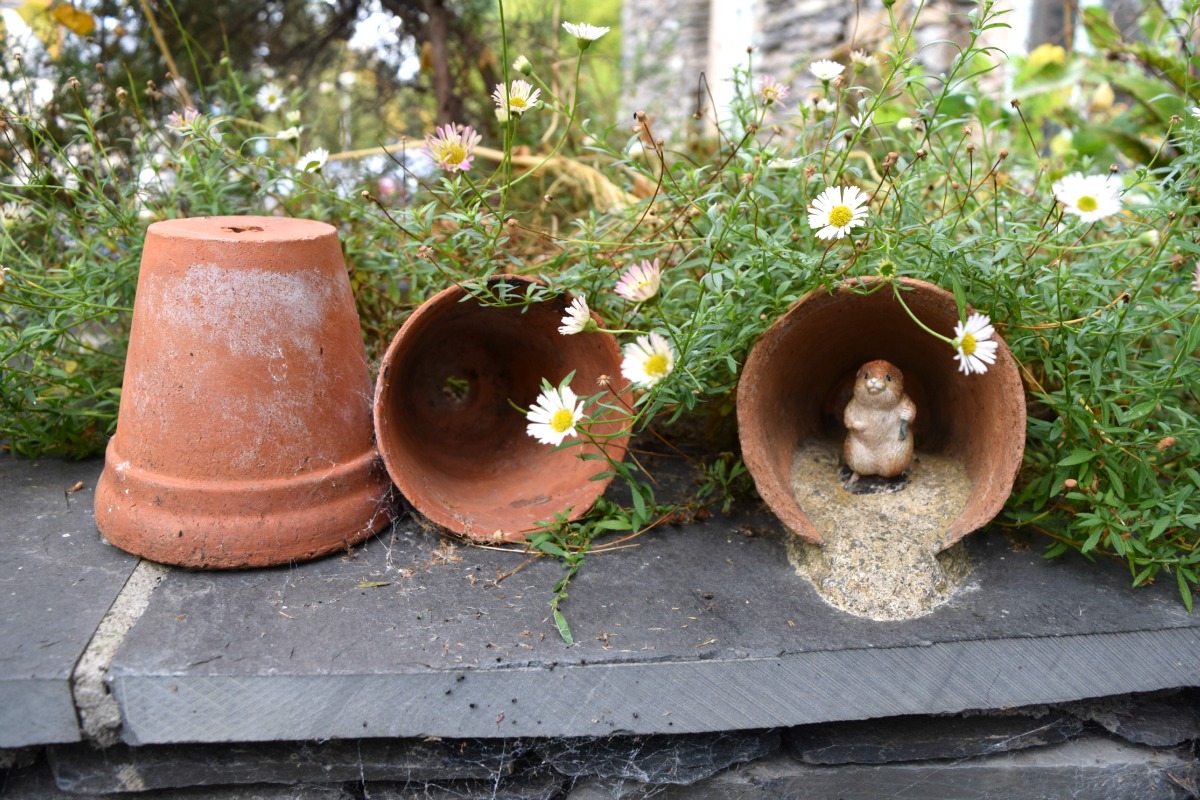 A visit to Peter Rabbit’s garden

I started writing this before we went away, but you will all know how hectic things are the few days...