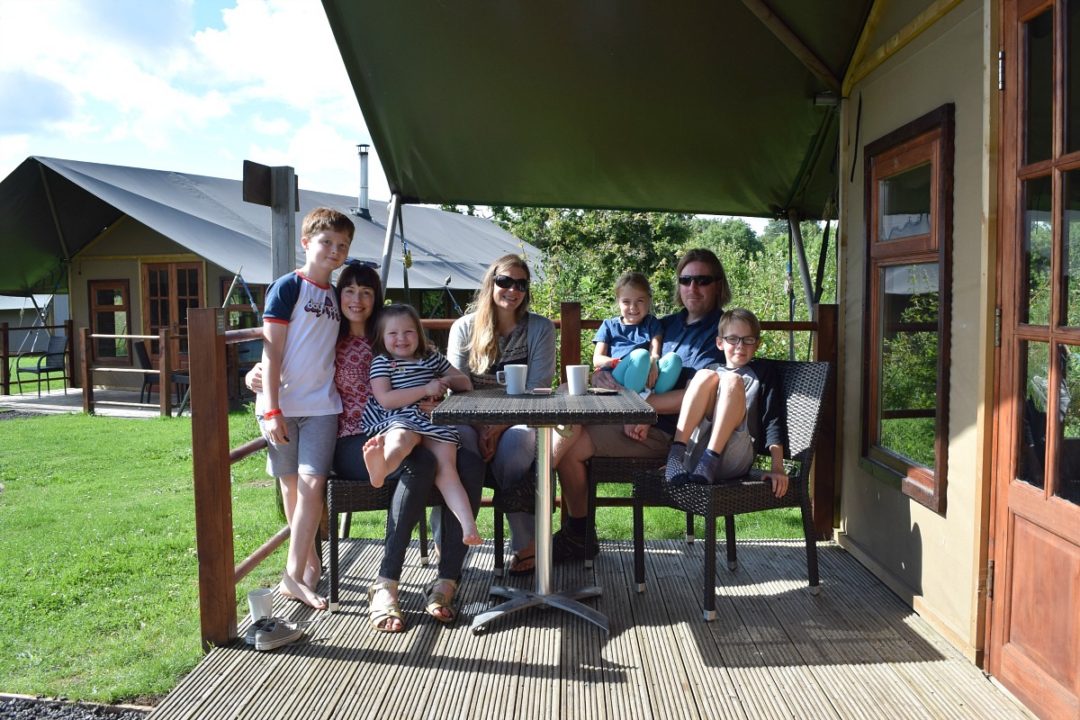 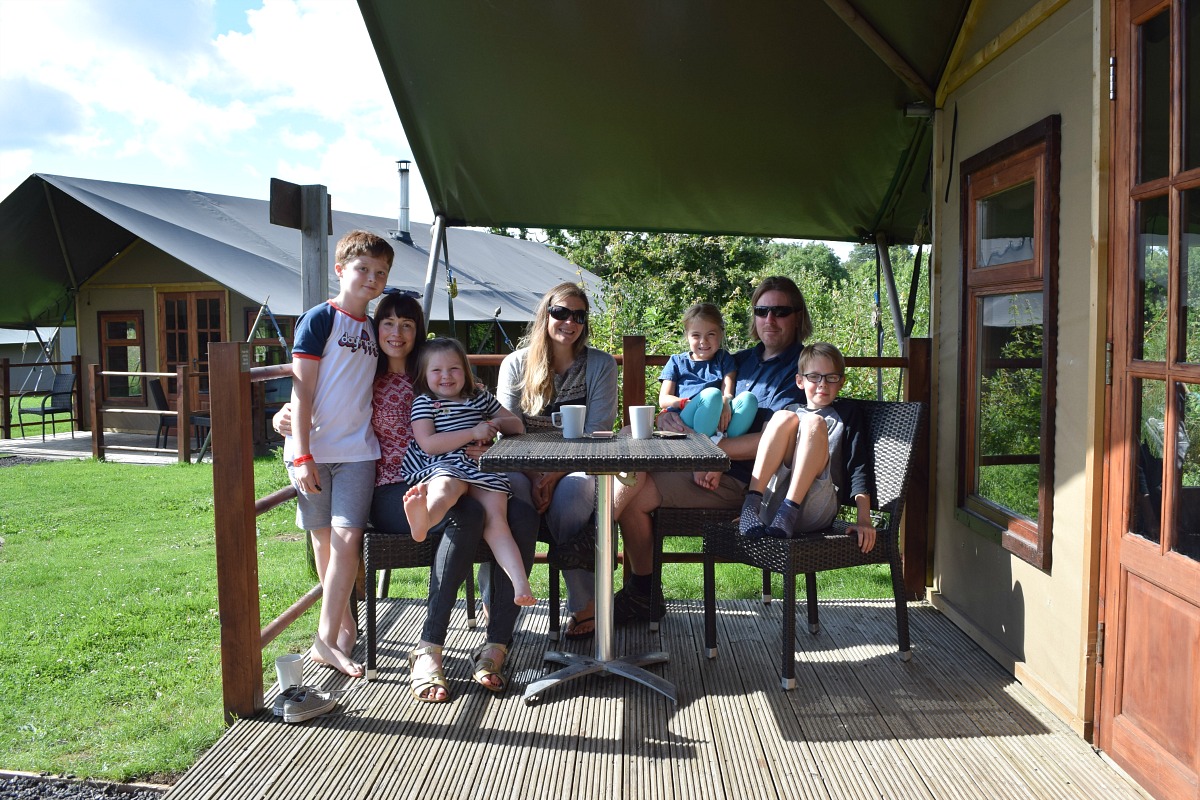 We’ve just spent a week in Devon, staying with friends before travelling up to Crealy Adventure Park and Resort in Exeter.

As a child many of my family holidays were spent camping and I was weaned on nights under canvas in good weather and bad, visions of my dad venturing outside in storms to hammer the tent pegs back in, and evening trips across a dewy field to the loo.

We used to have a large green tent with orange floral curtains, the type which now are advertised as ‘vintage tents’ at festivals up and down the country. I have very fond memories of it though and can’t wait to start camping with my two children. I’m yet to pitch my own tent with Sam and Flo – I’m working my way through the single mother tick list and this is to come next week – but we have made a start with our glamping weekend and a taste of what’s to come.

Glamping – or glamorous camping – at Crealy means staying in a large cabin with a carpeted floor, solid walls, windows, proper beds and a wood burning stove. It’s actually kind of a cross between a cabin and a tent, with a lockable door it feels really safe and secure, it was warm and comfortable but you still get the feeling of being outdoors and having that camping experience. 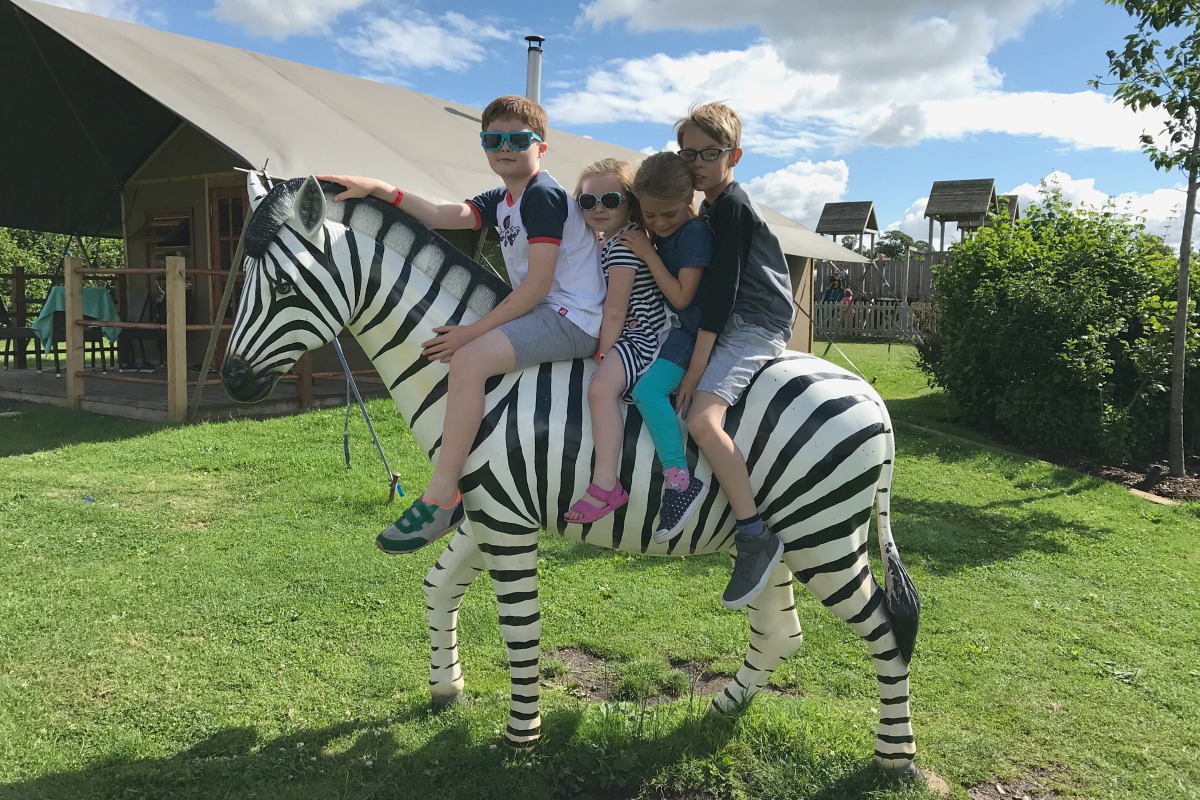 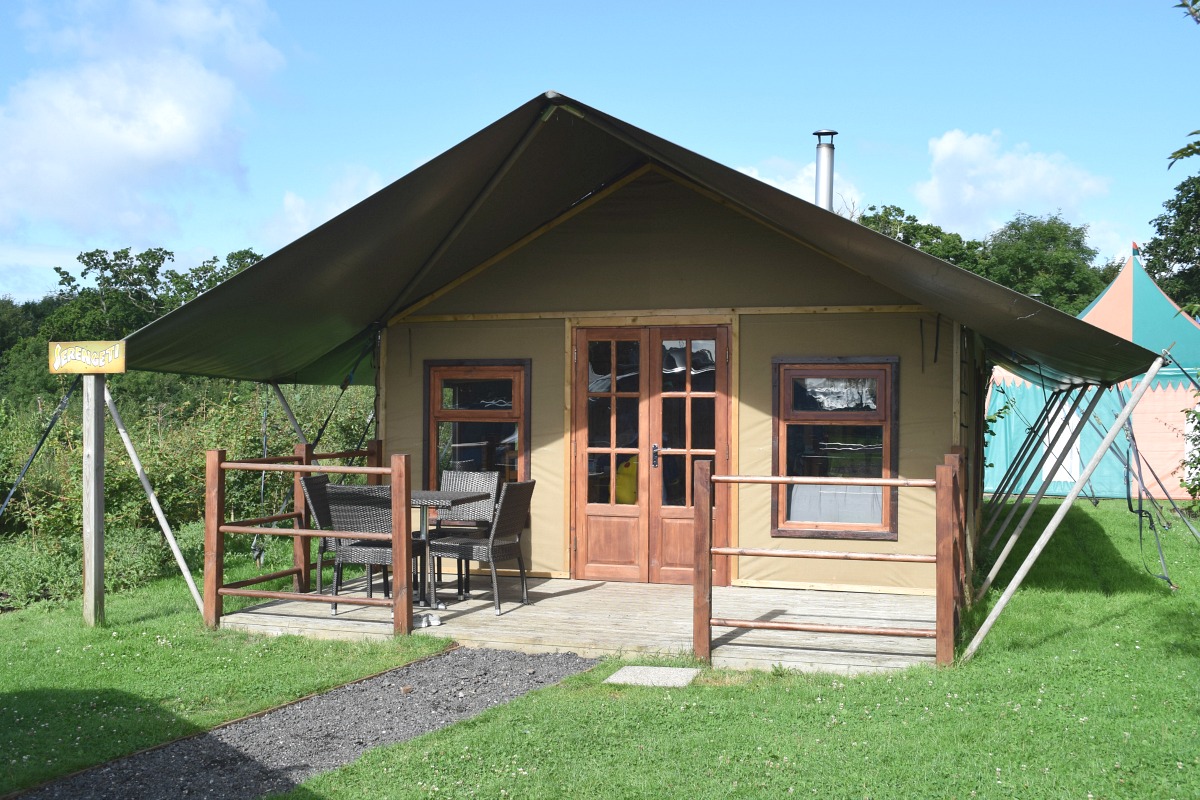 The cabin sleeps up to eight people and we really tested it out as there were seven of us using the double bedroom, bunk beds, double cabin bed and sofa bed. We stayed at Crealy with one of my best friends from school Joanne, her partner Dan and their children Joseph, eight, and Hattie, five.

The accommodation was spotlessly clean, really well-equipped and with a fabric-draped inner really felt like we were in a safari tent.

It was part of the ‘African Experience’, where each cabin is named after an area of Africa and model animals are placed on the grass outside. We stayed in a cabin called Serengeti, really close to the wash rooms (super clean and modern) and the on site play park (great to stop the kids getting bored while the adults are unpacking, cooking, drinking coffee on the decking).

It was also pretty close to a model zebra, which you can see we managed to fit all four kids on for a photo opportunity whether they liked it or not! We think they did. 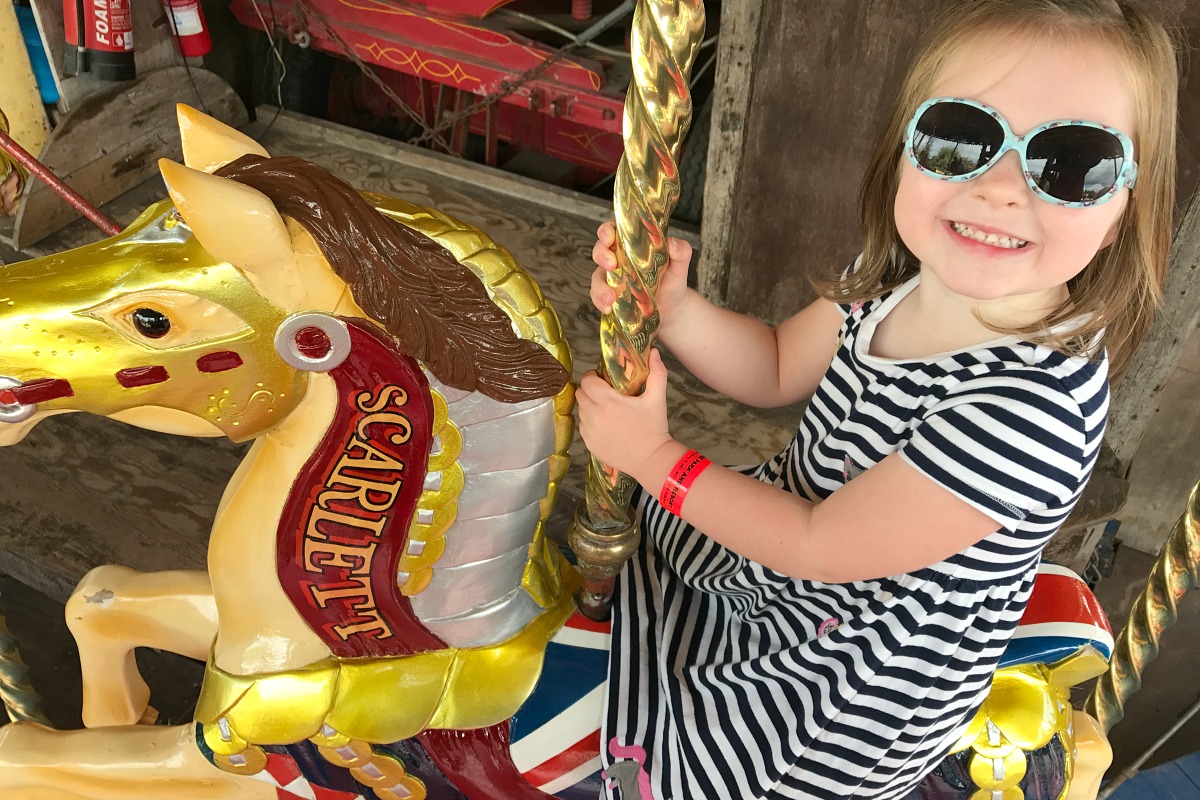 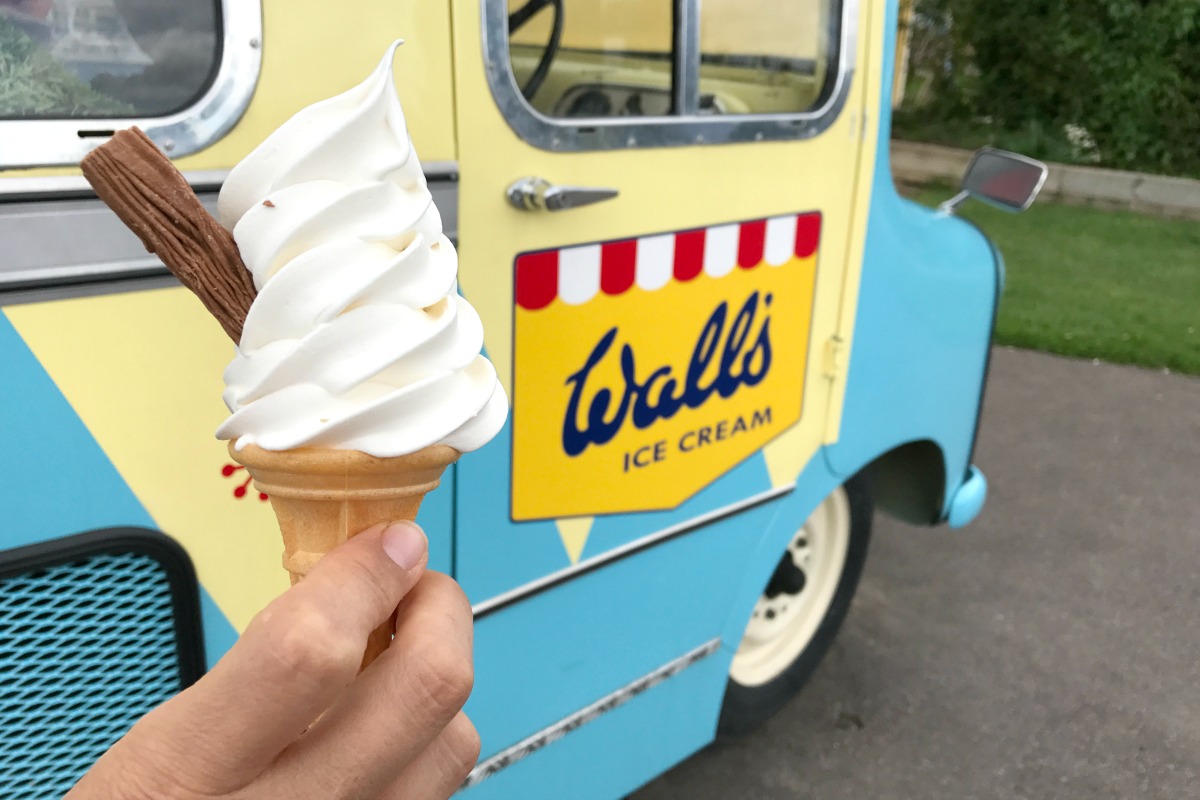 The cabin was really well kitted out; the kitchen area had units, a Belfast sink, kettle and toaster, and all the crockery and cutlery you would need. The only thing it didn’t have was a cafetiere or anything to make a fresh coffee in, which led to some Bear Grylls survival methods on the first morning of our stay. Dan let some ground coffee brew in a bowl, before pouring it through his daughter’s muslin blanket into a cup. A genius idea which worked ok, but not as well as the cafetiere which a really kind member of staff let us borrow from one of the lodges!

The beds were really comfortable, it was a real luxury to have a proper wooden-framed bed while ‘camping’ and the cabin bed was a bit of fun. Joanne referred to it as ‘the bed in the cupboard’, which is essentially what it was, but the kids thought it was great opening some wooden doors to climb into bed.

There were bean bags in the tent too, making more of a chill out area for the little ones, and a large decking area out the front with table and chairs.

Crealy is a family theme park and there are plenty of accommodation options on site. Well when I say on site, they are next to the main park but there is a side door which you can use without having to queue up at the main entrance each time you go in and out. Tickets to the theme park were included in our booking which meant we all had wristbands allowing us access for our whole stay.

As well as the cabins there is plenty of space to pitch your own tent, some large medieval-themed pavilions which are tents in bright colours with beds and wooden furniture and also some lodges with hot tubs. The camp site is rated five stars and I can see why. It was so clean and well-kept and the facilities were brilliant. Really clean and modern washrooms and showers, and even two family bathrooms with a bath, two toilets, a shower and sink. You can see on the photo they look like a bathroom you’d have at home, even with underfloor heating and the radio on!

We’ve never done a theme park before – mainly because of the ages of Sam and Florence (eight and four), the fact there is a one adult to two child ratio in our family and well, because if I’m honest I just don’t really like big rides. I’m a bit of a wuss when it comes to rollercoasters and so wasn’t really relishing the thought of taking my kids on them for the best part of a weekend. 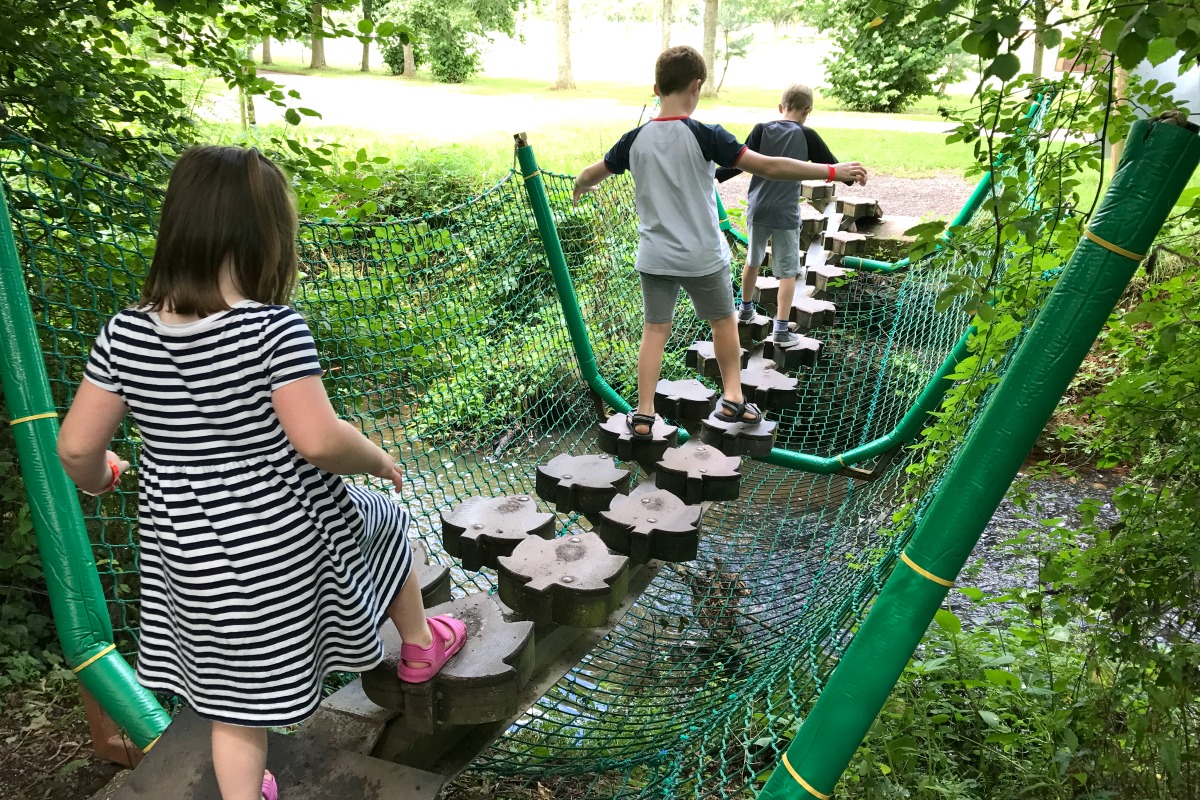 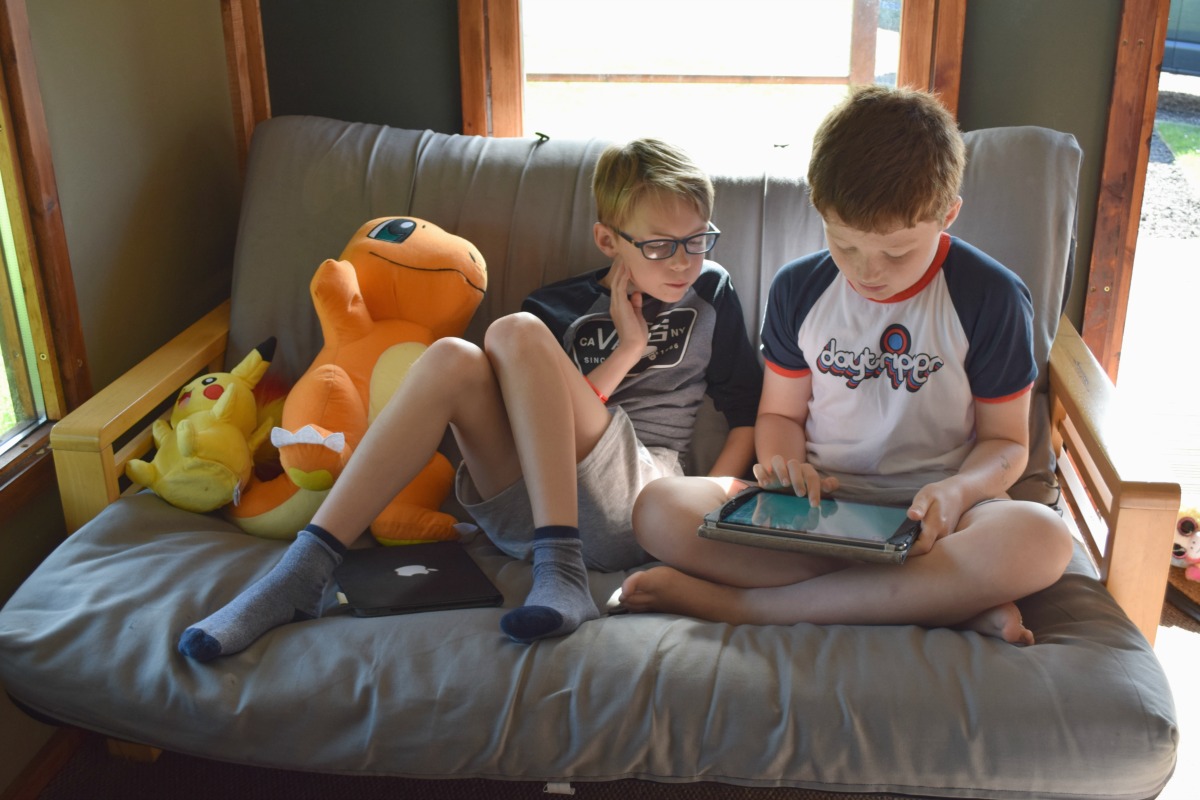 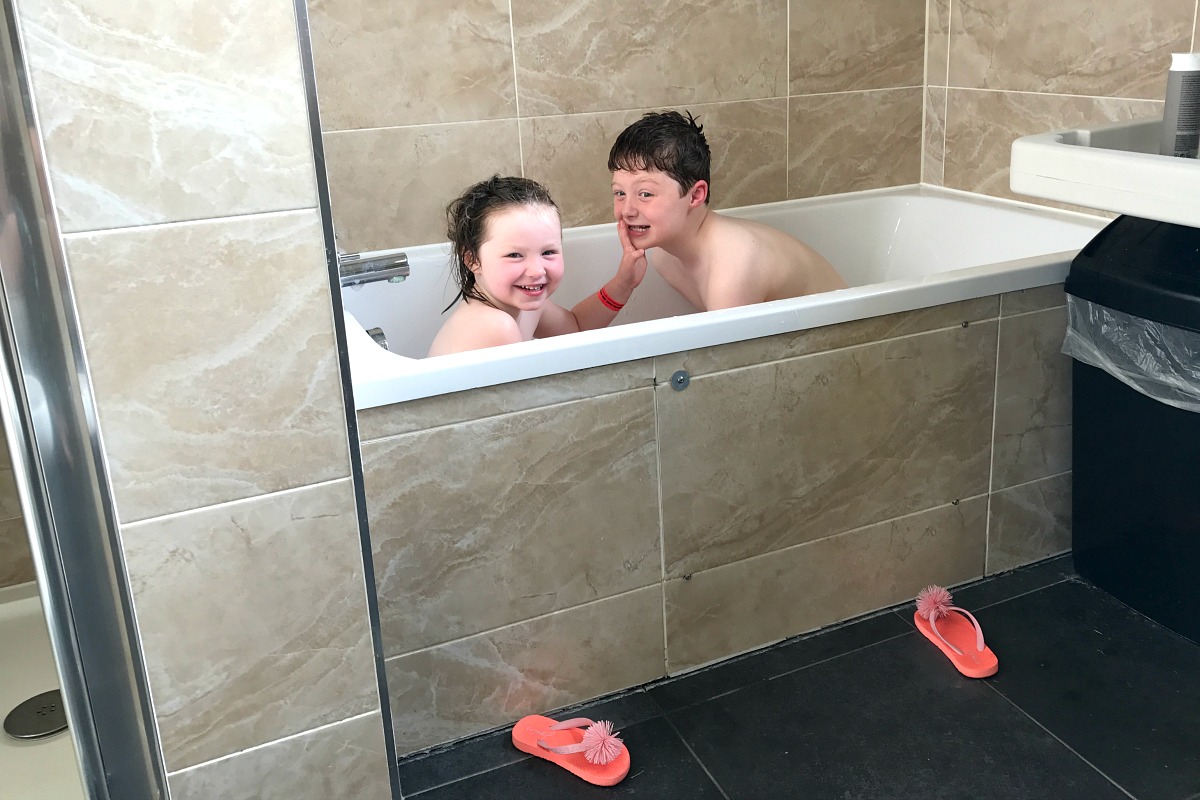 I was so pleasantly surprised though; the rides are all pretty small and manageable for young families. There was only really one of the main rides, the Twister, which the two youngest in our group were too small to go on. That was a relief because I really, really did not fancy going on that one. As I said earlier, I don’t have much stomach for rides and once did a bunk from the queue for The Rat at Lightwater Valley (circa 1988), so twisting around in a carriage in the sky is not my idea of fun. It is one of the most popular rides though, as is the Maximus, a Roman empire themed rollercoaster which was our first ride at Crealy.

Both Sam and Flo were so excited to get going on the rides, I think partly because they’d never experienced anything like them before and didn’t know what to expect! It was funny watching their faces as they queued up, all excited and happy, and then seeing their expressions change to pure fear as the carriages ducked and dived around the ride. I was impressed though that they gave most things a go, especially my friend’s daughter Hattie who wanted to go on absolutely everything, without any fear at all.

The park itself was really clean and well-kept, the staff were amazing and so lovely, and there is a real variety of activities and attractions. 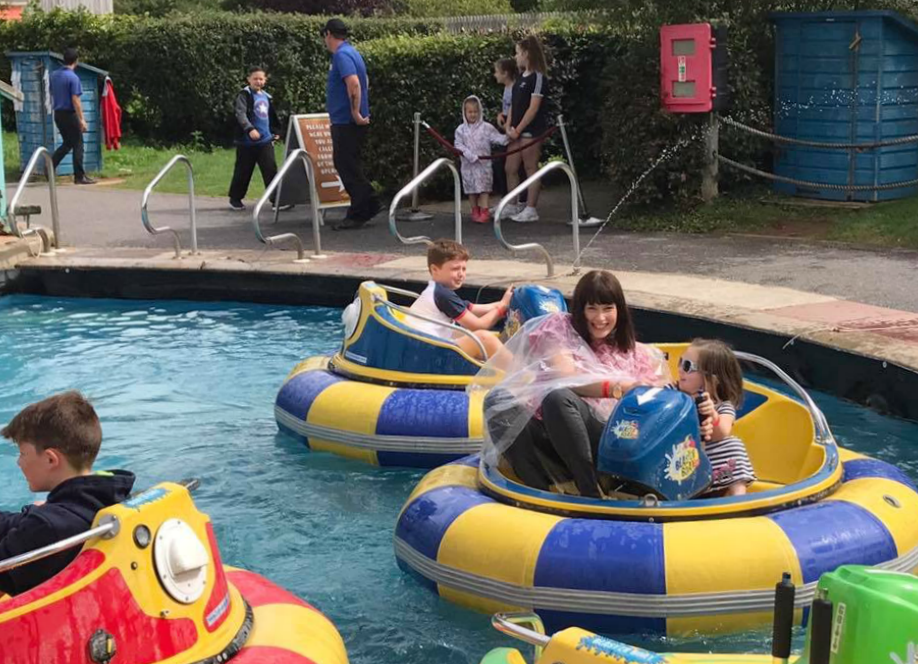 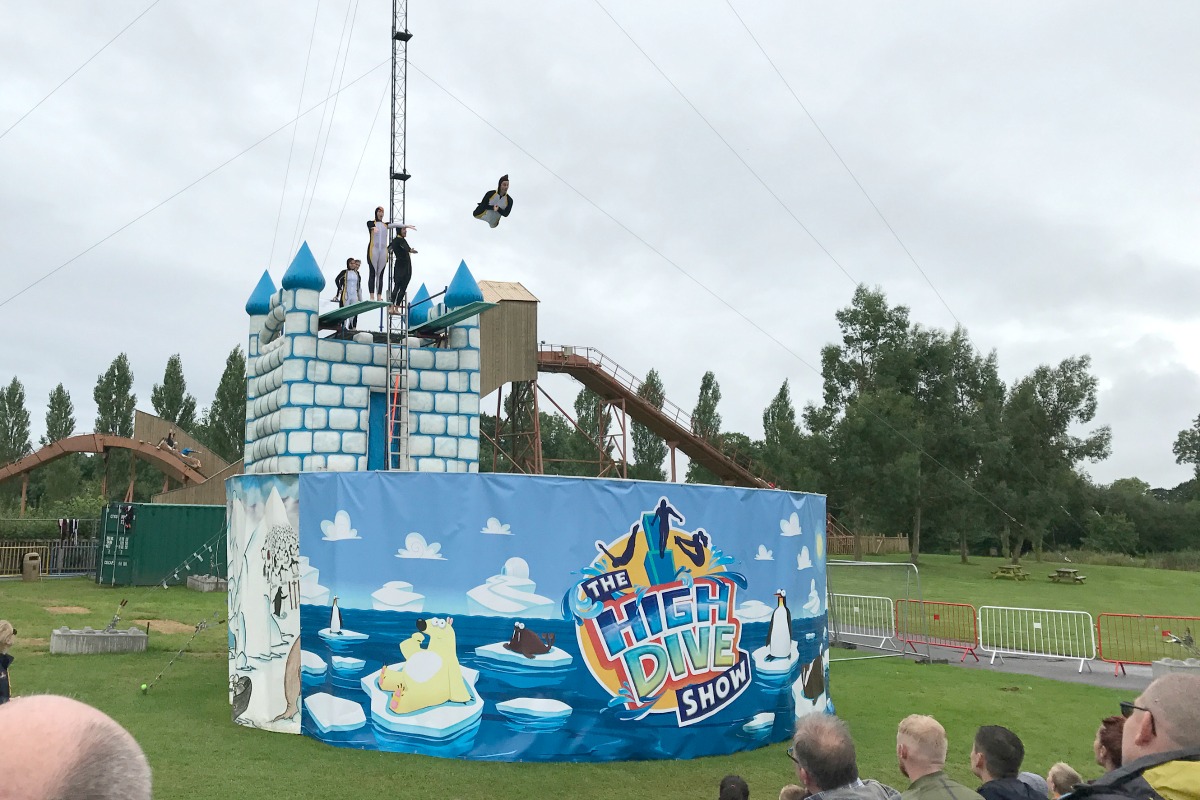 Apart from the rides, our highlights were the animals and feeding the goats, the River Run where you were set back from the park in quiet woodland, and the evening entertainment.

Guests at Crealy Meadows can go into the park in the evenings where there is a mini disco for young children, a small arcade and a huge soft play area right next to the bar. A little bit ‘old school holiday camp’ but the kids absolutely loved it, and it was great that the adults could sit and have a glass of wine (sadly in a plastic cup, but still, health and safety and all) while the little ones let off some steam.

The kids also really enjoyed the shows put on in the park throughout the day, like the High Dive show where divers dressed as penguins flipped into a pool from great heights, and Pop in the Park, where we watched tribute acts on a small stage next near one of the rollercoasters. Loads of fun for the children and lots of laughs from the adults, including a sightly cringe moment where I had to ask to have my photo taken with the fake Robbie Williams at the request of my daughter.

As our first experience of glamping I’d say it was a huge success and a really fun family break. As I posted a few pictures of our weekend on Instagram I had quite a few comments from friends saying they had been and how much they loved it, and I think my children are the perfect age for it. We stayed three nights at Crealy, Friday to Monday, and went to the theme park two days but I think if we were to stay longer we would be really well placed for day trips out of the park too. In Exeter you are not far from the beaches and Dartmoor is right on your doorstep, there are so many options for days out nearby. I’ll be writing a post soon about our time spent around Plymouth for more ideas on where to go in the local area. 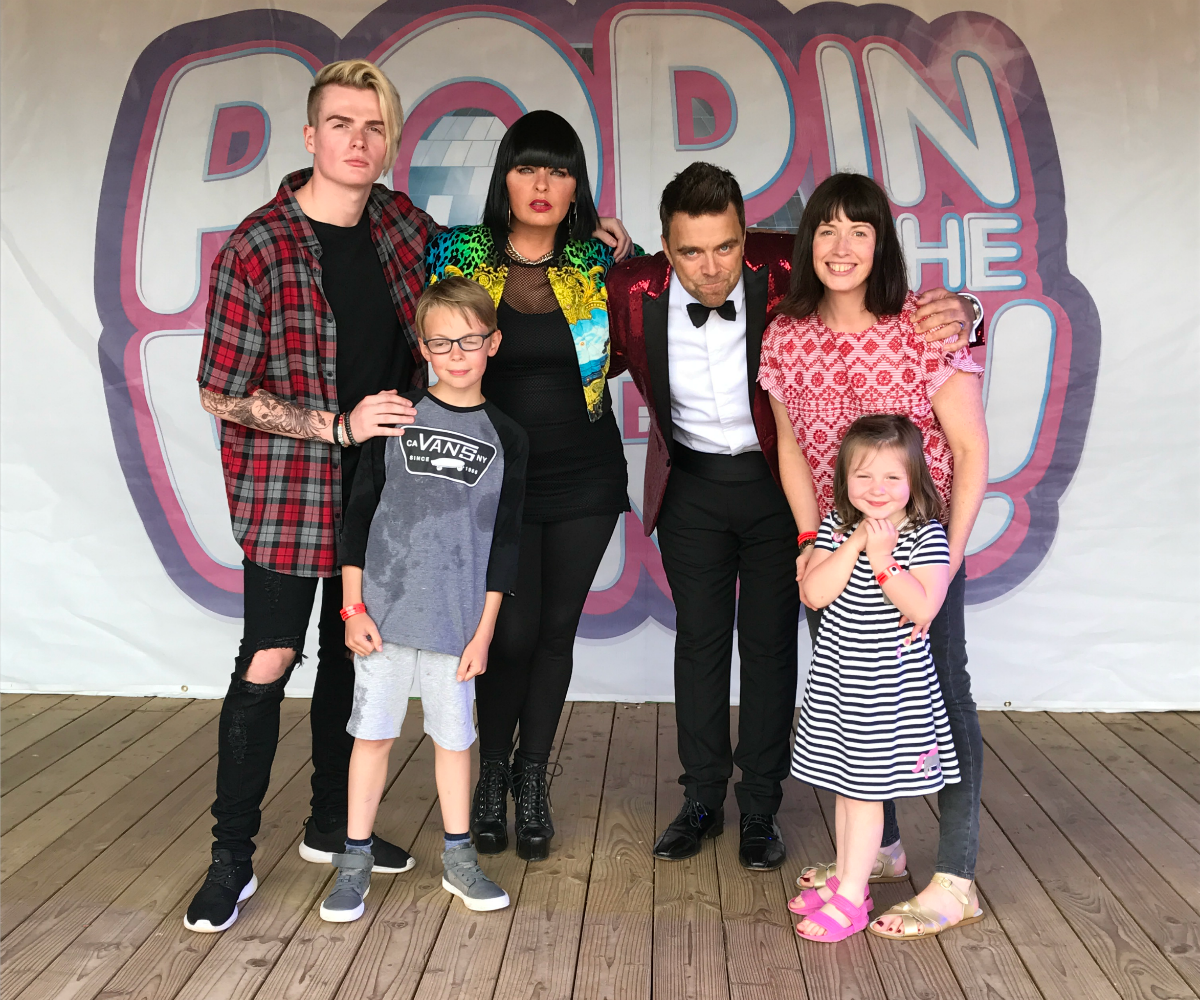 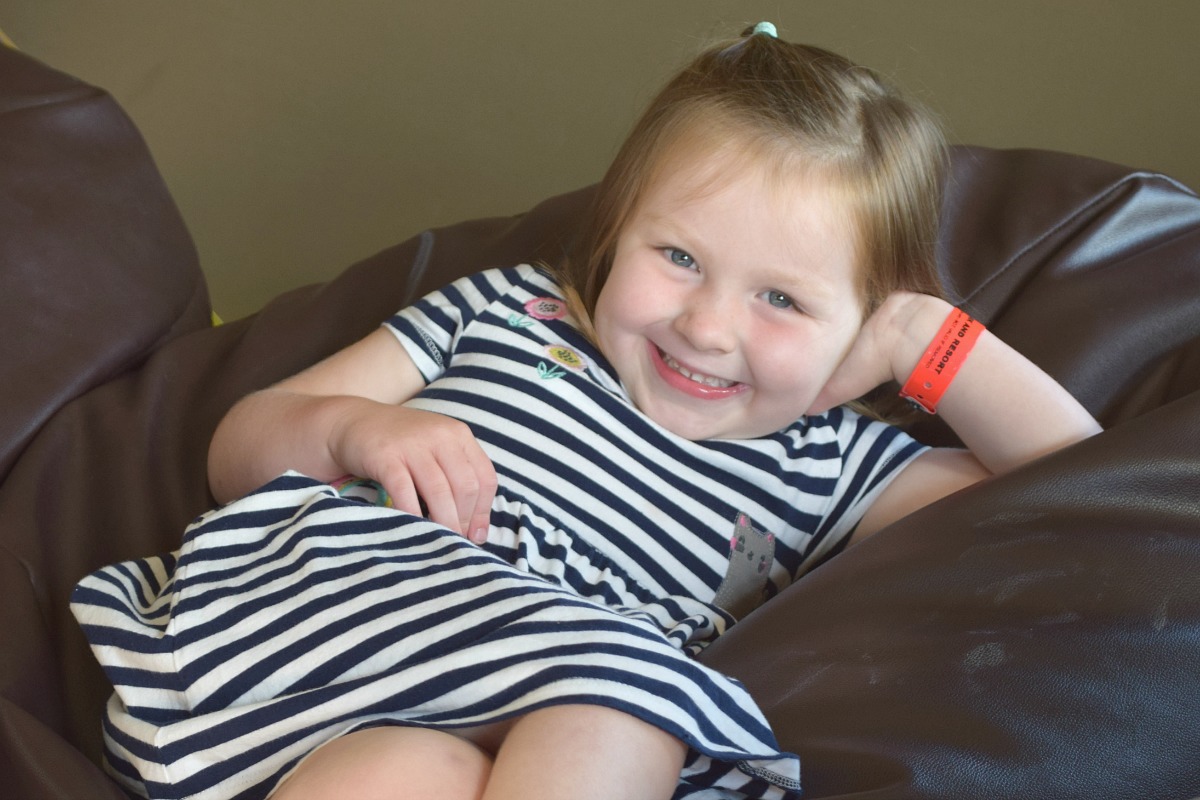 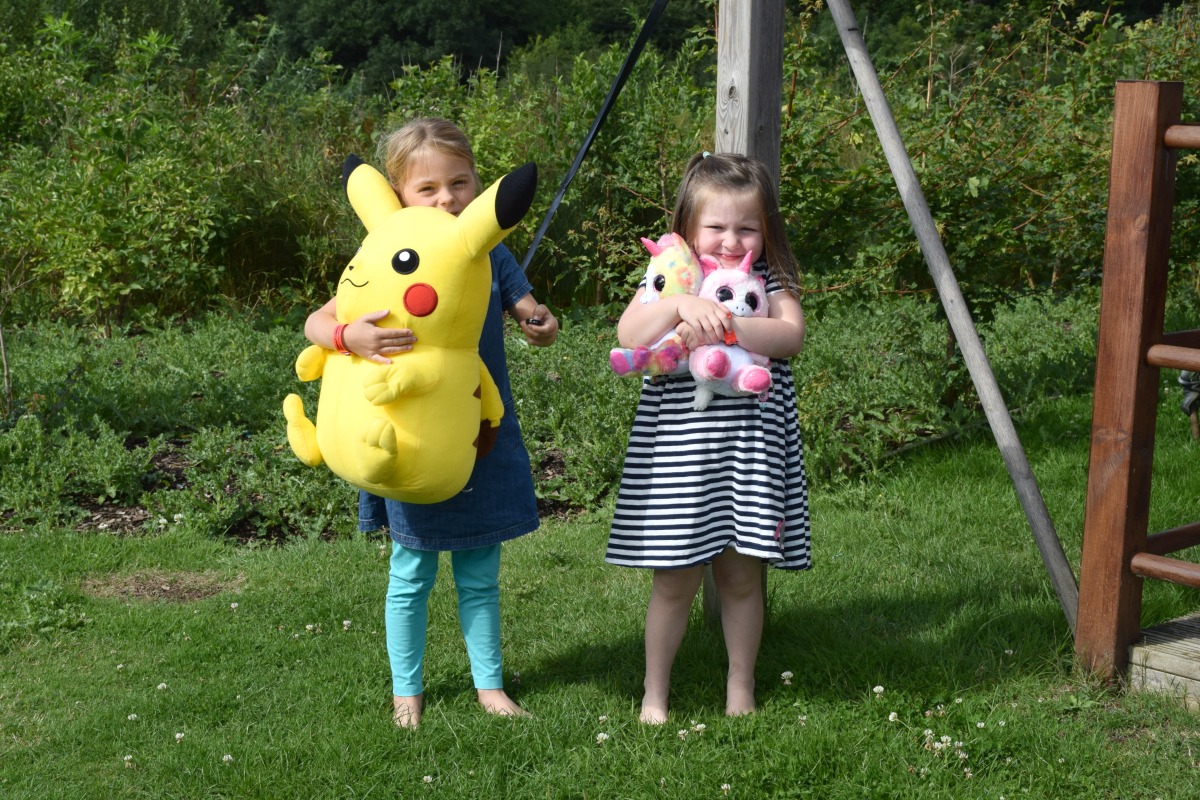 Before we went to Crealy I read a few other review posts and found a packing list really helpful, so here are my essential things to pack before you go:

– Bedding and towels, as these aren’t included with the cabin.

– Extra lighting, as the cabin gets really dark at night and there is only one main light in the living area. Torches also good for trips to the toilet with young kids. Alternatively you could use a portable camping loo like we did – but you’ll still need a torch!

– Washing up liquid and cloths, kitchen roll for spillages.

– A cafetiere if you can’t live without real coffee in the morning.

– Food supplies – there is a fridge and well-equiipped kitchen, which we used for breakfast and a few picnic-style and quick pasta dinners.

– A barbecue if you fancy cooking outside during your stay.

– A portable DVD player if you have one for early morning entertainment for the kids.

Wet weather gear even if the forecast is good, not only because this is the UK but because you might want protection on the water rides!

It rained pretty much the whole of our first day but we still managed to go on most of the rides and it didn’t spoil our fun.

The only thing that disappointed me was the lack of wi-fi. It was advertised as having wi-fi throughout the park but I couldn’t connect to it from the cabin as it must have been sightly out of range. My phone network didn’t work that well in Devon either (I’m on O2) so I rarely got a 4G signal all weekend. This might not have been a problem for many people but seeing as I am online a lot, and wanted to post pictures and updates of our trip, I found it inconvenient. I could however get a good wi-fi signal from the bar and cafe areas in the park, so managed to post online over coffee and/or gin!

We were offered a stay at Crealy in exchange for an honest review and I can honestly say we would recommend it for a family holiday. Sam and Flo have been talking about it ever since we got home and Flo even cried saying she missed the tent.

As we are based in West Yorkshire it was a fair drive home – five and a half hours – but it was easier than I expected and luckily the traffic wasn’t too bad.

Last time we drove to Devon the kids were a lot younger, Flo cried nearly the entire journey and we got stuck in a two-hour traffic jam near Bristol. This time, it was much better and I feel good that it’s another thing I’ve done on my own with my lively little ones.

Devon is now firmly on my list of favourite family holiday destinations. 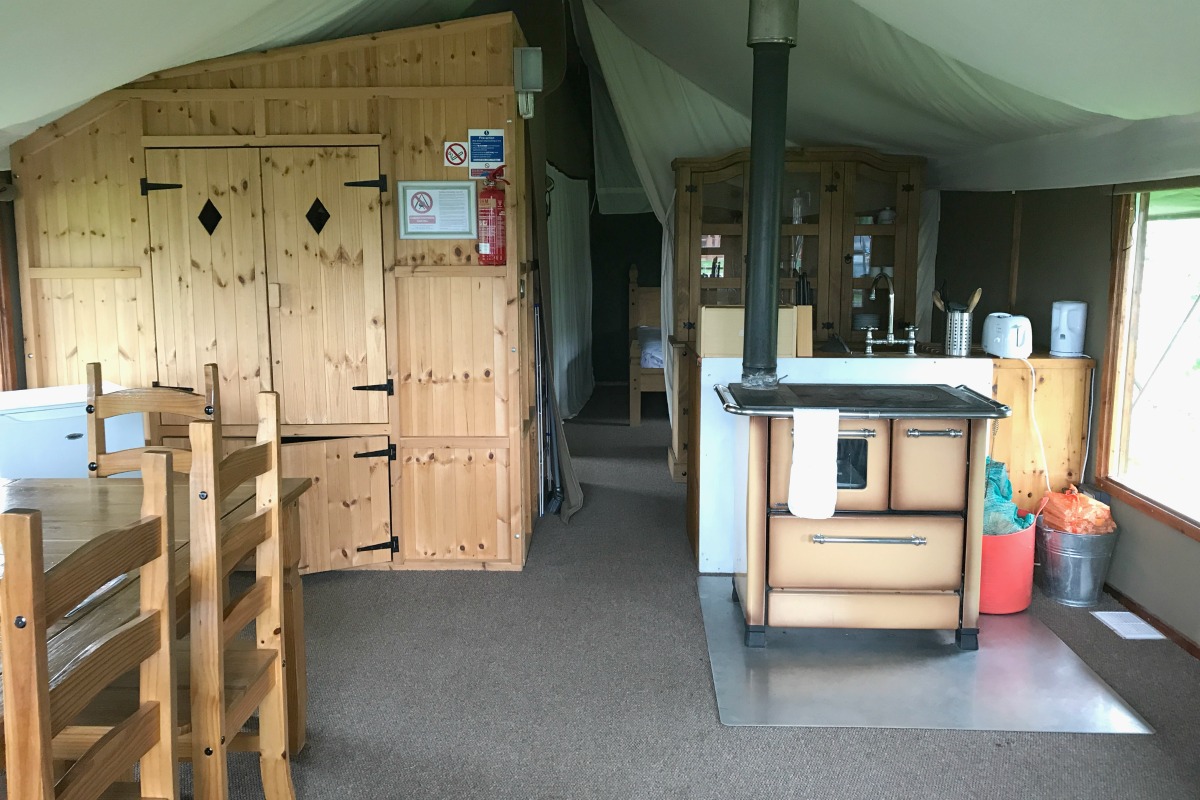 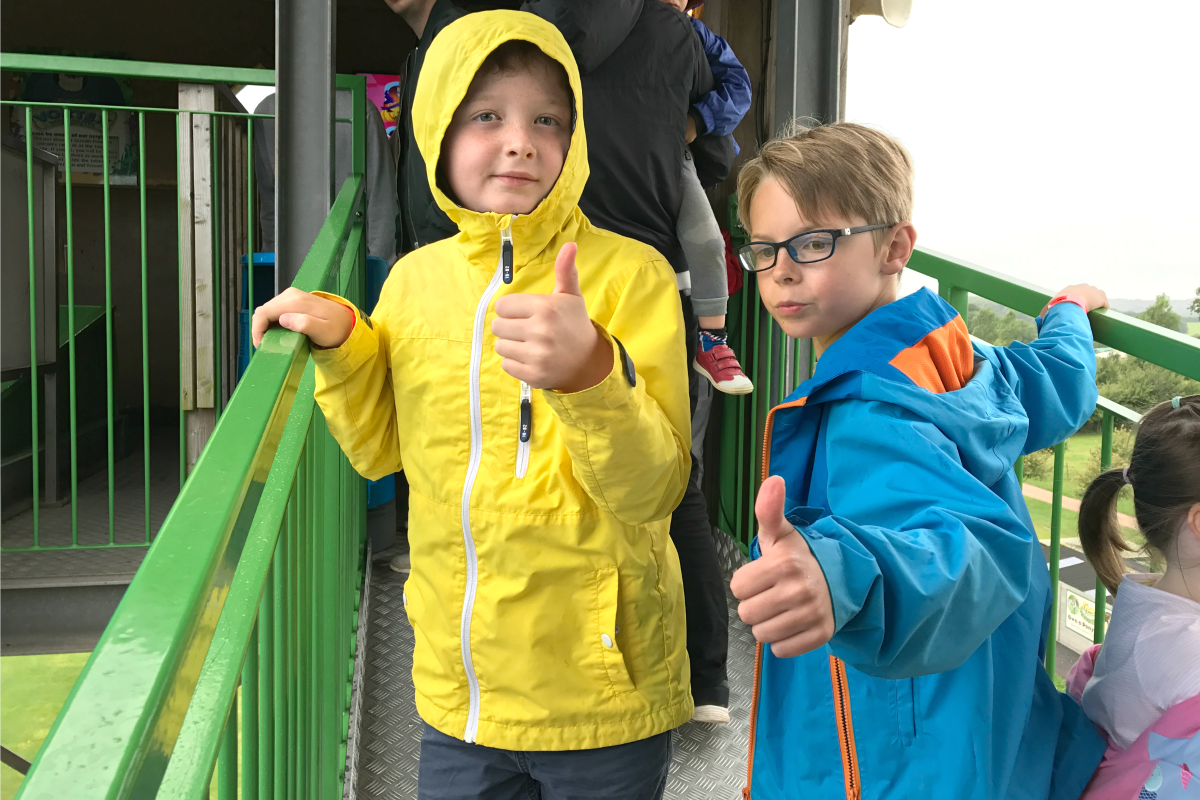 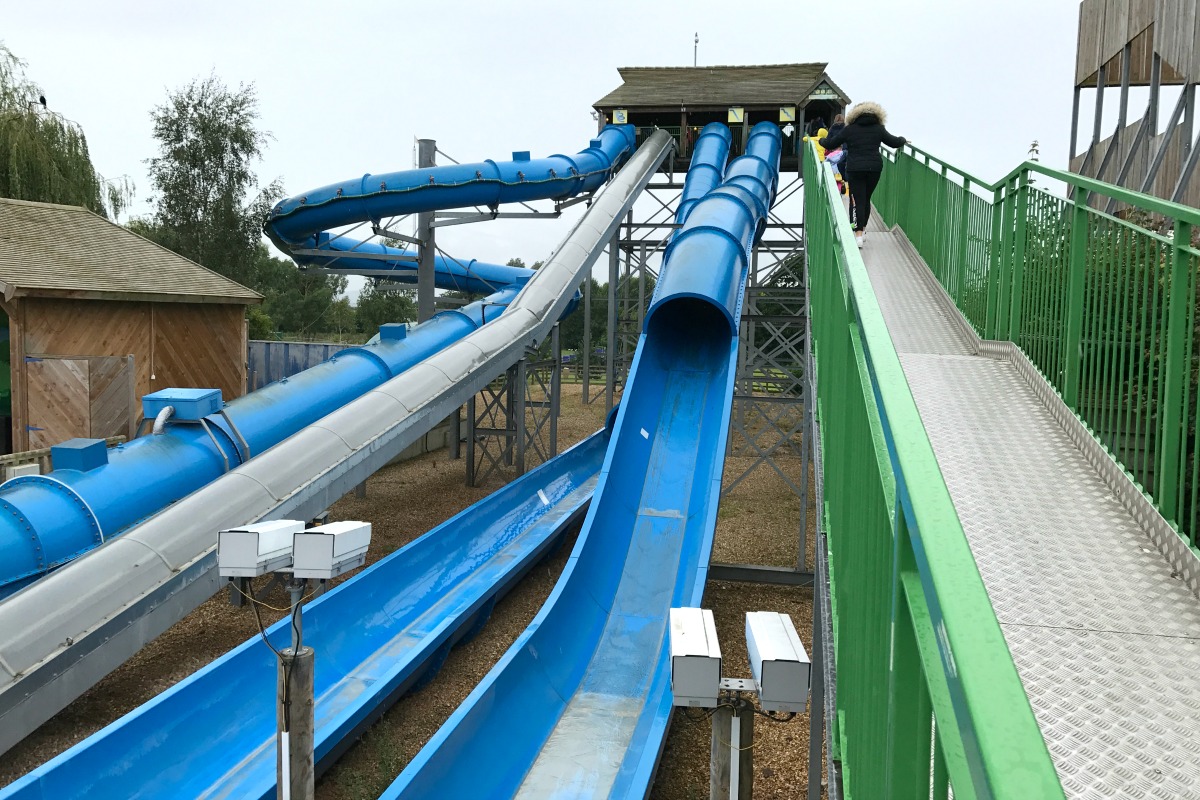 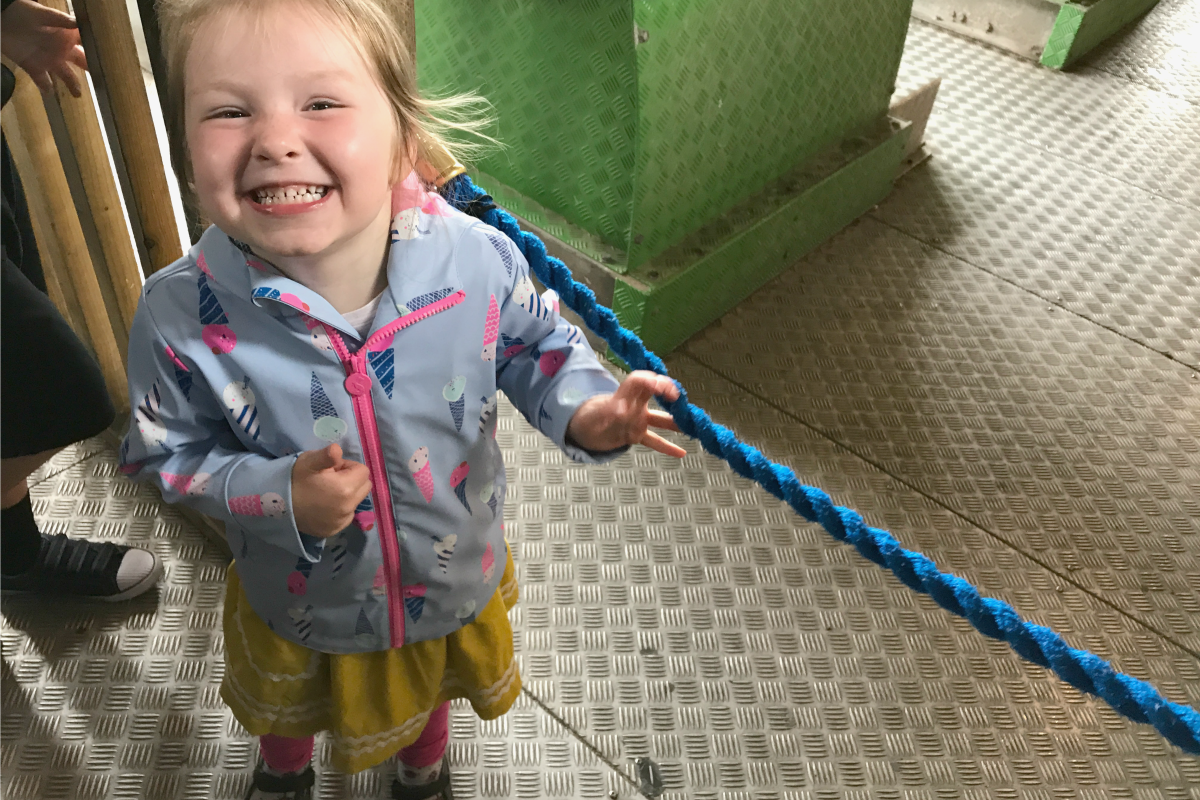 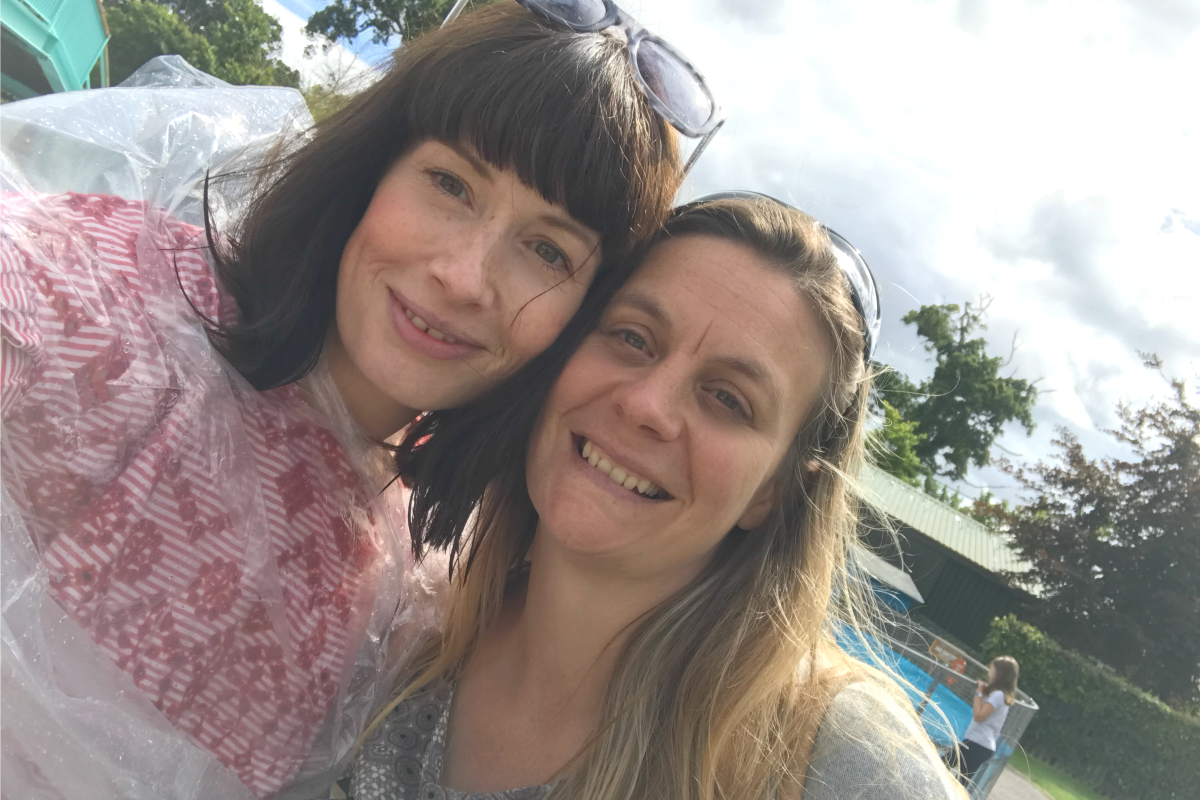 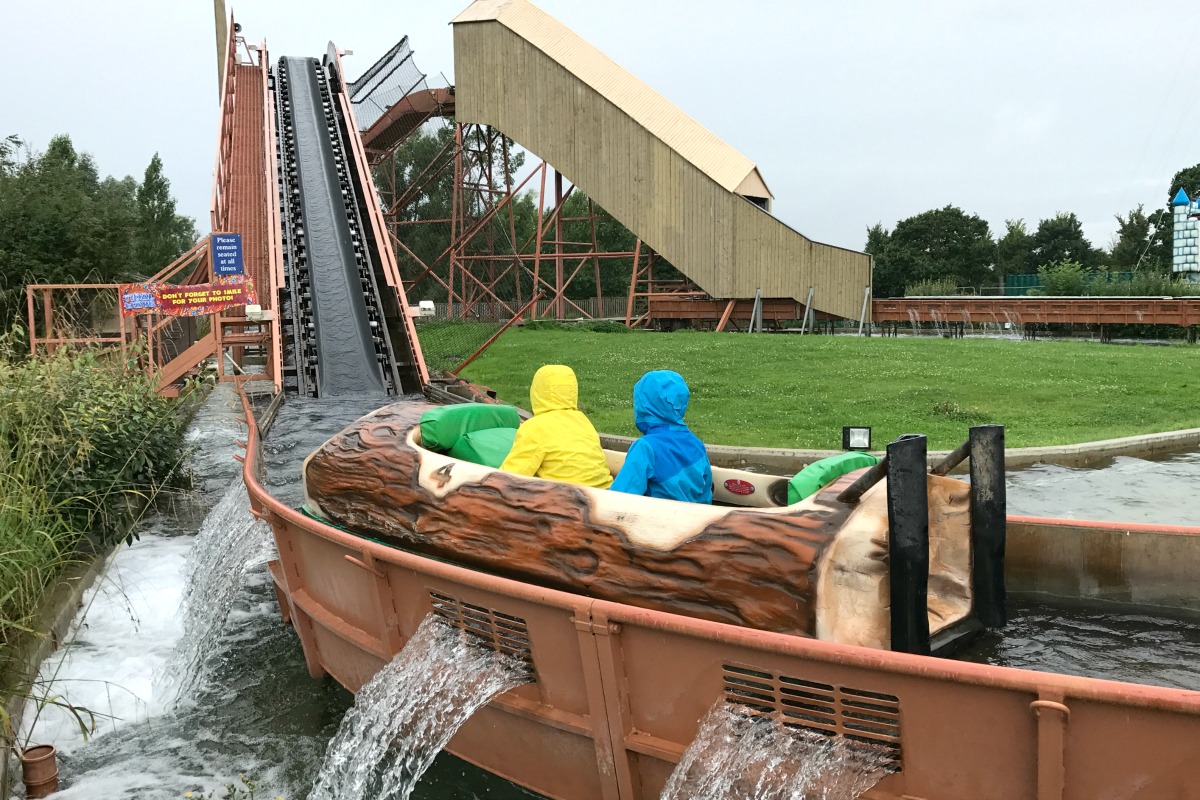 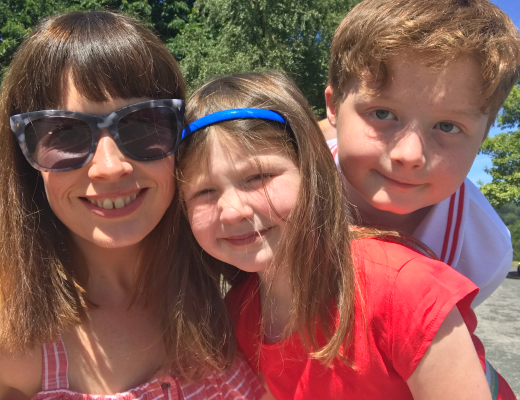 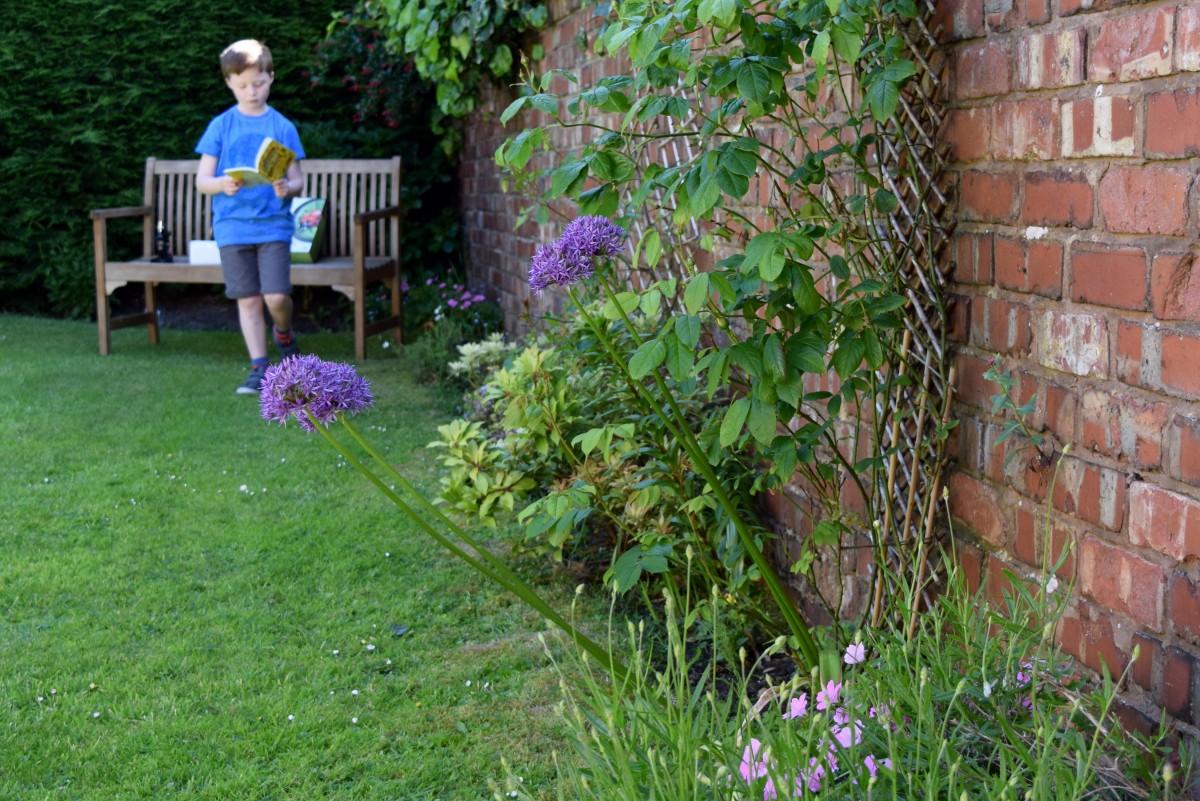 A rose crush with Green People

I've got a bit of thing for anything rose-scented at the moment, I think ever since I was given some...